URL of this page: http://www.nlm.nih.gov/medlineplus/lewybodydisease.html
Also called: Dementia with Lewy bodies
Share on facebookShare on twitter
Lewy body disease is one of the most common causes of dementia in the elderly. Dementia is the loss of mental functions severe enough to affect normal activities and relationships. Lewy body disease happens when abnormal structures, called Lewy bodies, build up in areas of the brain. The disease may cause a wide range of symptoms, including
Lewy body disease can be hard to diagnose, because Parkinson's disease and Alzheimer's disease cause similar symptoms. Scientists think that Lewy body disease might be related to these diseases, or that they sometimes happen together.
Lewy body disease usually begins between the ages of 50 and 85. The disease gets worse over time. There is no cure. Treatment focuses on drugs to help symptoms. 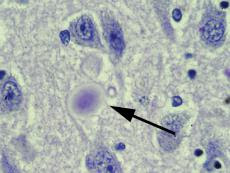