Sometimes when a baby is born, the external genitalia do not look typically male or female. At other times, the genitalia look typical, but do not match the baby’s expected gender based on chromosome information, for example, parents were expecting a boy based on amniocentisis, but their baby’s genitalia appear more female. In these cases, the baby is said to have ambiguous genitalia, conditions that fall under the umbrella diagnosis of Disorders of Sex Development (DSD).


What is typical genital development?

Early in fetal development, the tissue that will become the gonads (ovaries or testes) is undifferentiated and has the potential to become either ovaries or testes. Gonadal development is the result of a complex interaction between chromosomes and hormones. Humans have 46 chromosomes in each cell of their bodies, or 23 pairs. The 23rd pair determines our gender; females usually have two X chromosomes, while males usually have one X and one Y chromosome. The chromosome complement (karyotype) in humans is written: 46 XX for a female or 46 XY for a male.
There is a gene located on the short arm (top half) of the Y chromosome, called "SRY," which, if present, will cause the undifferentiated gonad to become testes (indicating a male) around the sixth week of fetal life. At the same time, shrinkage of what would have been the female reproductive tract occurs. As the testes produce testosterone, the phallus (penis), scrotum and urethra form. Later, during the seventh to eighth month of the pregnancy, the testes will descend into the scrotum.
If there is no SRY gene, the gonad will usually differentiate into an ovary (indicating a female). Likewise, the female reproductive tract will continue to develop, forming the uterus and fallopian tubes. At the same time, shrinkage of what would have become the male reproductive organs occurs.


What are ambiguous genitalia?

A variety of genetic, hormonal, and environmental factors may influence development, leading to ambiguous genitalia. Ambiguous genitalia, as the word implies, may make determining the child's gender more difficult. Very few infants with ambiguous genitalia have genitals that are so ambiguous that a gender determination is not able to be made at birth or shortly thereafter. Far more common are the following observations at birth:
There is great variability in how the genitals may appear.

There are a number of different causes of ambiguous genitalia, with the most common described below. The cause, in many cases, is not known and the disorder appears to occur by chance. Children who are born with ambiguous genitalia may fall into one of the following groups:

46 XY DSD – children with a 46 XY karyotype and one of the following conditions:

Ovotesticular DSD – children who have:

Gonadal dysgenesis - children who have:

How is the gender determined in a child with ambiguous genitalia?


Our approach to treating ambiguous genitalia

Sometimes there is an increased risk for tumors in the gonads. Treatment for ambiguous genitalia depends of the type of the disorder, but will usually include corrective surgery to remove or create reproductive organs appropriate for the gender of the child. Treatment may also include hormone replacement therapy (HRT). Treatment is decided on a case-by-case basis through discussions with the family. Our team of providers will help each family decide what makes the most sense for their child.
Reviewed by: Aileen P. Schast, PhD

Endocrine Diseases: MedlinePlus
Your endocrine system includes eight major glands throughout your body. These glands make hormones. Hormones are chemical messengers. They travel through your bloodstream to tissues or organs. Hormones work slowly and affect body processes from head to toe. These include
If your hormone levels are too high or too low, you may have a hormone disorder. Hormone diseases also occur if your body does not respond to hormones the way it is supposed to. Stress, infection and changes in your blood's fluid and electrolyte balance can also influence hormone levels.
In the United States, the most common endocrine disease is diabetes. There are many others. They are usually treated by controlling how much hormone your body makes. Hormone supplements can help if the problem is too little of a hormone. 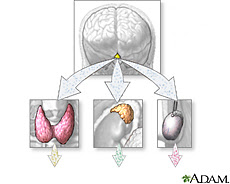