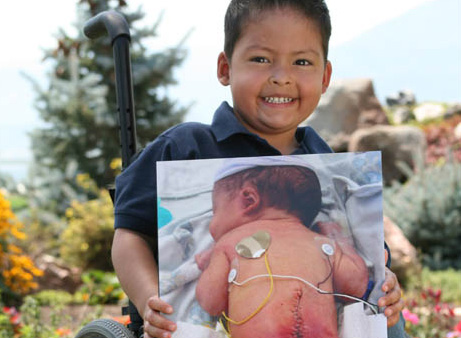 Amanda found out at 32 weeks pregnant that her third child, Zachary, would be born with spina bifida.  Although the family was unsure and afraid of what the future held, they also felt hope.  Zachary has a strong spirit and by no means has a “poor quality of life”.  He is an inspiration to everyone around him.
I had two very active boys, two years and eight months old, when I found out I was four months pregnant, and that I was having another boy. It took me a long time to be happy about the pregnancy. I was 32 weeks along when we found out that our baby would be born with spina bifida. We were told that it was a very serious condition, that he would not walk, that he would have many other problems, and that he would have a “poor quality of life.” We left feeling unsure and afraid, yet we also felt hope and knew that somehow, everything would be okay.
Zachary was delivered at 37 weeks, as soon as his lungs were ready. Within 24 hours, he had surgery to close the hole on his back and two days later, he had surgery to have a shunt, or tube, placed in his brain to drain the excess fluid into his abdominal cavity. He did very well and was only in the hospital five days. At ten months old, he had to have his shunt replaced. He recently had surgery to stretch the muscles and tendons in his hips and ankles, allowing his legs to straighten out all the way. Zachary can’t walk, but thanks to amazing therapists, he is very strong and mobile in his own way. He likes to show-off in his wheelchair and “run” as fast as he can in it. He has had and will have many challenges and disappointments, but that is part of life for all of us. He has a strong spirit and by no means has a “poor quality of life.” He is our hero and our inspiration and we love him and his brothers so much.
Publicado por salud equitativa en 12:16