Over the years, people suffering from eczema have slathered their skin with lotions containing everything from avocado oil to zinc oxide. So, what about a lotion that features bacteria as the active ingredient? That might seem like the last thing a person with a skin problem would want to do, but it’s actually a very […] 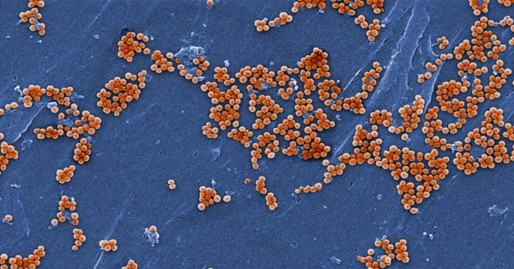 Caption: Scanning electron microscopic image of Staphylococcus aureus bacteria (orange).
Credit: CDC/Jeff Hageman, MHS
Over the years, people suffering from eczema have slathered their skin with lotions containing everything from avocado oil to zinc oxide. So, what about a lotion that features bacteria as the active ingredient? That might seem like the last thing a person with a skin problem would want to do, but it’s actually a very real possibility, based on new findings that build upon the growing realization that many microbes living in and on the human body—our microbiome—are essential for good health. The idea behind such a bacterial lotion is that good bugs can displace bad bugs.
Eczema is a noncontagious inflammatory skin condition characterized by a dry, itchy rash. It most commonly affects the cheeks, arms, and legs. Previous studies have suggested that the balance of microbes present on people with eczema is different than on those with healthy skin [1]. One major difference is a proliferation of a bad type of bacteria, called Staphylococcus aureus.
Recently, an NIH-funded research team found that healthy human skin harbors beneficial strains of Staphylococcus bacteria with the power to keep Staph aureus in check. To see if there might be a way to restore this natural balance artificially, the researchers created a lotion containing the protective bacteria and tested it on the arms of volunteers who had eczema [2]. Just 24 hours after one dose of the lotion was applied, the researchers found the volunteers’ skin had greatly reduced levels of Staph aureus. While further study is needed to learn whether the treatment can improve skin health, the findings suggest that similar lotions might offer a new approach for treating eczema and other skin conditions. Think of it as a probiotic for the skin!
In their study published in Science Translational Medicine, Richard Gallo, of the University of California, San Diego and his colleagues, set out to connect the dots between eczema, Staph aureus, and changes to the skin microbiome. Step one involved swabbing the forearms of 30 people with healthy skin and almost 50 people with outbreaks of the most common form of eczema, atopic dermatitis. From each swab, the researchers isolated hundreds of bacterial colonies and tested their ability to inhibit the growth of Staph aureus in lab dishes.
Gallo’s team found that bacterial strains collected from the skin of healthy people showed antimicrobial activity that inhibited the growth of Staph aureus. The researchers traced that inhibition to previously unknown antimicrobial peptides produced by certain strains of Staphylococcus hominis and Staphylococcus epidermidis, which are benign bacteria that are quite abundant on the skin. The researchers then discovered that the antimicrobial strains not only kill Staph aureus quite effectively, they do so without causing harm to other beneficial bacteria commonly found on healthy skin. In contrast to the healthy people, people with eczema had much lower levels of the two strains of protective bacteria.
Based on encouraging results in a mouse model, Gallo and his colleague initiated a Phase I clinical trial involving five volunteers with atopic dermatitis that tested positive for Staph aureus. To beef up the amount of protective Staph bacteria on the volunteers’ skin, the researchers took a small sample of each patients’ skin micriobiome, grew up more of the good Staph strains in the lab, and used them to create a personalized probiotic lotion. The volunteers then each received a single dose of probiotic lotion on one arm and regular lotion on the other. Twenty-four hours later, it was clear—the probiotic lotion reduced levels of the bad bug, Staph aureus, on the participants’ skin.
The researchers report that a larger human clinical trial is now underway, designed to test whether continued use of probiotic lotion can provide lasting protection against Staph aureus and improve eczema symptoms. Hopefully, the promise of these new findings can provide some encouragement to the more than 31 million Americans, many of them children, who now suffer from eczema [3].
References:
[1] Temporal shifts in the skin microbiome associated with disease flares and treatment in children with atopic dermatitis. Kong HH, Oh J, Deming C, Conlan S, Grice EA, Beatson MA, Nomicos E, Polley EC, Komarow HD; NISC Comparative Sequence Program., Murray PR, Turner ML, Segre JA. Genome Res. 2012 May;22(5):850-859.
[2] Antimicrobials from human skin commensal bacteria protect against Staphylococcus aureus and are deficient in atopic dermatitis. Nakatsuji T, Chen TH, Narala S, Chun KA, Two AM, Yun T, Shafiq F, Kotol PF, Bouslimani A, Melnik AV, Latif H, Kim JN, Lockhart A, Artis K, David G, Taylor P, Streib J, Dorrestein PC, Grier A, Gill SR, Zengler K, Hata TR, Leung DY, Gallo RL.Sci Transl Med. 2017 Feb 22;9(378)
[3] Eczema prevalence in the United States. National Eczema Association.
Links:
Eczema (Atopic Dermatitis) (National Institute of Allergy and Infectious Diseases/NIH)
Human Microbiome Project (Common Fund/NIH)
Gallo Lab (University of California, San Diego)
NIH Support: National Institute of Allergy and Infectious Diseases; National Institute of Arthritis and Musculoskeletal and Skin Diseases