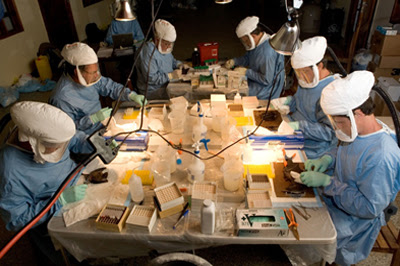 CDC scientists studying bats in Uganda to learn more about their relationship to Marburg virus.
Outbreaks of hemorrhagic fever (e.g., Ebola , Marburg virus) in Africa occur when people are infected by viruses from the Filoviridae family. Outbreaks commonly are characterized by person-to-person spread and high fatality rates. No licensed vaccines or therapies exist to prevent infection or treat the illnesses caused by these viruses.
Outbreaks are controlled by identifying and isolating sick people. Rapid diagnostic tests help in this process. But because known filoviruses are genetically diverse—up to 50% at the nucleotide level—currently available sensitive sequence-based tests, such as real-time polymerase chain reaction tests, could miss a new virus. For example, Bundibugyo virus (species Bundibugyo ebolavirus) remained undetected until 2007, yet it caused two large outbreaks in Africa over the last decade. For these reasons, it is important to identify and characterize filovirus diversity in nature.
The natural reservoirs for ebolaviruses are largely unknown, but scientists believe they are various species of bats. This conclusion is based on reports of various bat species having ebolavirus-specific RNA or antibodies. Recently, virus isolation, PCR, and antibody data have shown a specific species of cave-dwelling fruit bat to be the natural reservoir for the related marburgviruses.
Therefore, to identify the natural reservoir(s) for the known ebolaviruses and discover previously undetected filoviruses, CDC will use a next-generation sequencing approach to screen thousands of bat specimens from areas of Africa known to have had filovirus activity. This project will expand the current database of filovirus genetic diversity, supporting development of improved diagnostic tests and the expansion of surveillance for these emerging threats.