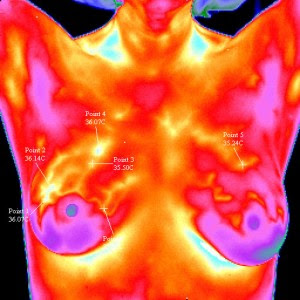 Thermography of breast cancer. Image credit: Danvasilis/Wikimedia Commons
A simple blood test is currently in development that could help predict the likelihood of a woman developing breast cancer, even in the absence of a high-risk BRCA1 gene mutation, according to research published today inGenome Medicine. So what was found, and what could this mean for future cancer prevention and treatment?

Breast cancer is the most common cancer in the UK, and it’s highly likely you’ll know someone close to you who’s been affected by it.

My partner’s mother, soon to be my mother-in-law, was diagnosed with breast cancer nearly three years ago. What was particularly scary for all of us when we found out about her diagnosis, was that her sister had died of the same disease around 20 years earlier. What’s more, my partner’s cousin had also recently had a diagnosis.

With these close family ties to the disease, it was pretty much assumed by all of us that there was likely to be some kind of genetic link, and suspicions of the BRCA1 or BRCA2 gene mutations being present in the family were rife.

Thankfully, both my partner’s mother and cousin are now in remission and doing well – we have been very lucky. The lingering concern about the risk to other relatives – daughters, cousins, aunts – still remains though. It was for that reason that genetic tests were carried out and, to our surprise, came back negative.

According to Cancer Research UK, BRCA1 and BRCA2 mutations are uncommon. They affect an estimated 0.11% and 0.12% of the general population respectively, which equates to around 1 in 450 women carrying a mutation. BRCA1 and BRCA2 mutations explain around 15-20% of cases with first-degree family history of breast cancer – that still leaves a lot of cases relatively unexplained. But are there other indicators for breast cancer risk?

Scientists are beginning to understand that genetic mutations are not the sole contributors to disease development and that the way in which genes are arranged in our cells can affect whether they function appropriately – that is, whether they are turned on or off.

The arrangement and expression of our genes is overseen by the process of epigenetics and one of the most studied epigenetic mechanisms is a process called DNA methylation. It was this process that was the focus of a new study published in Genome Medicine today.

The researchers from UCL found an epigenetic signature in the blood of women predisposed for breast cancer owing to BRCA1 mutation. Strikingly though, the same signature was also shown to be in the blood of women without a BRCA1 mutation but who went on to develop breast cancer. In other words, the signature could be a potential early marker of women’s cancer risk in the general population.

“We have developed a new test for breast cancer risk in women who have not inherited the BRCA1 mutation,” says Professor Martin Widschwendter, the study’s lead author.  “We demonstrated the technique using blood samples, but it could be even more effective when applied to cheek or cervical swabs. This has the potential to predict breast cancer risk far better than current screening tools.”

It seems that this is very much the beginning of further research into the potential of epigenetic testing and cancer. According to Professor Widschwendter, he and his colleagues are now using this technique to develop clinical tests for both breast and gynaecological cancers.

Knowing what to do with the results

Of course, knowing that you have a risk of cancer is only the beginning. Undoubtedly, the discussions around what to do with the results of screening tests like this will continue to proliferate. I’ve written before about the challenges of deciding what to do if you know you’re predisposed to develop a certain disease.

The media storm surrounding Angelina Jolie’s double mastectomy and the public reaction to it clearly go to show that it’s a subject many have an opinion on and that affects people the world over.

To my mind, the positives of knowing your risk in the end outweigh the negatives, which is what makes the research published today so promising. It could allow us to identify those who need to be screened more regularly for example, and it could encourage people to check themselves or be more aware of signs and symptoms so that diagnosis can happen earlier.

Alongside the tests though, there will need to be helpful and informative advice about what to do with the information people gain from them. Something I hope that researchers will also be studying, alongside the mechanisms of the tests themselves.

Ultimately, with tests like this one now in development there is the hope that one day we can prevent cancers from ever developing, or catch them so early that survival rates increase significantly. That day may still be a way off, but it’s exciting to see we’re on the path towards it.
Publicado por salud equitativa en 4:27