What is a triatomine bug and what does it look like?

Triatomine bugs are a type of reduviid bug that can carry the parasite Trypanosoma cruzi that causes Chagas disease. 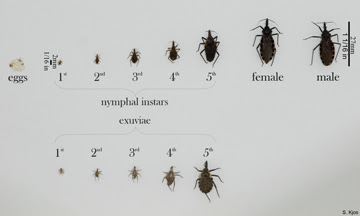 Various triatomine bugs in all life stages, from eggs to nymphs to fully grown adults. A variety of bug species, that share similar traits, are pictured. Larger Picture

Where are triatomine bugs typically found?

Triatomine bugs (also called reduviid bugs, "kissing" bugs, assassin bugs, cone-nosed bugs, and blood suckers) can live indoors, in cracks and holes of substandard housing, or in a variety of outdoor settings including:
They are typically found in the southern United States, Mexico, Central America, and South America (as far south as southern Argentina). The map below details triatomine occurrence by U.S. state. 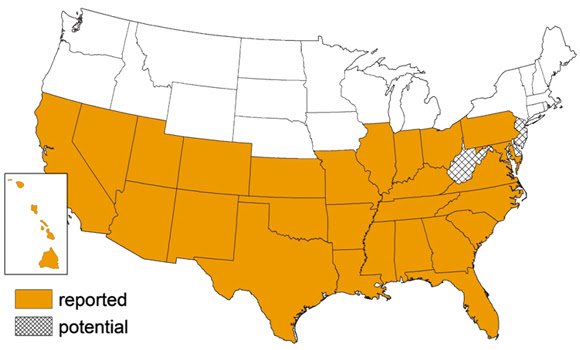 Triatomine Bug Occurrence by State
Eleven different species of triatomine bugs have been found in the southern United States:
Triatomines are primarily nocturnal and feed on the blood of mammals (including humans), birds, and reptiles. Triatomine bugs live in a wide range of environmental settings, generally within close proximity to a blood host. In areas of Latin America where human Chagas disease is an important public health problem, the bugs nest in cracks and holes of substandard housing.
Because most indoor structures in the United States are built with plastered walls and sealed entryways to prevent insect invasion, triatomine bugs rarely infest indoor areas of houses. Discovery of immature stages of the bug (wingless, smaller nymphs) inside may be an indication of infestation. When the bugs are found inside, they are likely to be in one of the following settings:

How can I keep triatomine bugs away from my home?

Synthetic pyrethroid sprays have been used successfully in Latin America to eliminate house infestations. Although similar chemicals are available in the United States, none have been specifically approved for use against triatomine bugs. A licensed pest control operator should be consulted if considering the use of insecticides. Please note that roach hotels or other "bait" formulations do not work against triatomine bugs. Long lasting insecticide treated bednets and curtains have been shown to kill these bugs.
Other precautions to prevent house infestation include:
Back To Top

I think I found a triatomine bug. What should I do? 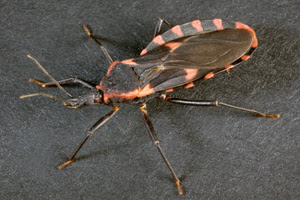 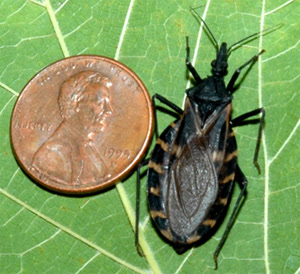 Triatoma gerstaeckeri next to a penny for scale. Photo courtesy S. Kjos. 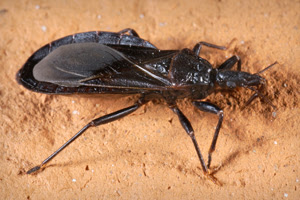 Triatoma protracta Photo Courtesy: James Gathany
Please do not touch or squash the bug. Place a container on top of the bug, slide the bug inside, and fill it with rubbing alcohol or, if not available, freeze the bug in the container. Then, you may take it to your local extension service, health department, or a university laboratory for species identification. In the event that none of these resources is available in your area, you may contact CDC’s Division of Parasitic Diseases and Malaria (parasites@cdc.gov) for species identification or T. cruzi testing.
Any material containing bug parts or feces should also be submitted for testing, preferably in a plastic bag or clean sealable container. Surfaces that have come into contact with the bug should be cleaned with a solution made of 1 part bleach to 9 parts water (or 7 parts ethanol to 3 parts water)

How can I tell if the bug I’ve found is a triatomine and not another kind of bug?

There are many beetles and non-triatomine reduviid bugs that resemble the triatomine bug. Two examples of non-triatomine reduviid bugs that do not feed on human blood are the wheel bug and the assassin bug. Some plant-feeding bugs, such as Coreidae, also resemble the triatomine. If you are unsure if the bug you’ve found is a triatomine, you may wish to consult with an expert, such as an entomologist, for clarification.
More on: Bugs Commonly Confused with Triatomine Bugs

Can I get Chagas disease from a triatomine bug?

Yes. However, the transmission of Chagas disease from a bug to a human is not easy. The parasite that causes the disease is in the bug feces. The bug generally defecates on or near a person while it is feeding on his or her blood, generally when the person is sleeping. Transmission occurs when fecal material gets rubbed into the bite wound or into a mucous membrane (for example, the eye or mouth), and the parasite enters the body.
It is important to note that not all triatomine bugs are infected with the parasite that causes Chagas disease. The likelihood of getting Chagas disease from a triatomine bug in the United States is low, even if the bug is infected.

Could I be allergic to the bite of a triatomine bug? 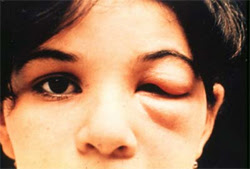 What do I do if I think I may have acquired Chagas disease?

If you suspect you have Chagas disease, consult your health care provider. Or, to find a physician familiar with diagnosis and treatment of Chagas disease and other parasitic infections, ask your general practitioner or primary care physician for a referral. You may wish to consider visiting a physician who specializes in infectious diseases. To locate a clinician in your area, please visit the American Society of Tropical Medicine and Hygiene’s Clinical Consultants Directory