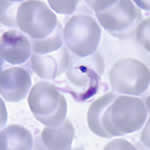 Trypansoma cruzi parasite in a thin blood smear. (CDC Photo)
The diagnosis of Chagas disease can be made by observation of the parasite in a blood smear by microscopic examination. A thick and thin blood smear are made and stained for visualization of parasites. However, a blood smear works well only in the acute phase of infection when parasites are seen circulating in blood.
Diagnosis of chronic Chagas disease is made after consideration of the patient's clinical findings, as well as by the likelihood of being infected, such as having lived in an endemic country. Diagnosis is generally made by testing with at least two different serologic tests.