Suggested citation for this article
To the Editor: Rat hepatitis E virus (HEV), a member of genus Hepevirus in the family Hepeviridae, was first detected in Norway rats in Germany in 2010 (1, 2). Since then, this rat HEVhas been detected in multiple wild rat species in the United States, Vietnam, Germany, and Indonesia (3–7). Studies have shown that rat HEV failed to infect rhesus monkeys and pigs, suggesting that rat HEV is restricted to its natural host (6, 8). However, it is not known whether animals other than rats are susceptible to rat HEV.
The Asian musk shrew (Suncus murinus), also called the Asian house shrew, is a small mole-like mammal belonging to the family Soricidae (order Soricomorpha), and wild rats are classified in the family Muridae (order Rodentia). Musk shrews originated from the Indian subcontinent and are now found from southern Asia and Afghanistan to the Malay Archipelago and southern Japan. These shrews are commensal rodents, commonly found living in human households. We previously showed that rat HEV infection frequently occurs in wild rats in Zhanjiang City, Guangdong Province, China (9). Asian musk shrews share this same environment; thus, they can be exposed to rat HEV derived from wild rats.
To determine whether Asian musk shrews are a reservoir for rat HEV, we examined 260 shrews (112 males, 148 females) that were trapped in Zhanjiang City during December 2011–September 2012. Of the 260 trapped shrews, 147 were from Mazhang District (23 from a pig farm and 124 from the villages of Chiling, Chofa, Beigou, Huangwai, Houyang, and Nanpan) and 113 were from Chikan District.
Blood samples were collected from the shrews, and serum was separated by centrifugation (2,500 × g for 20 min at 4°C), and stored at −80°C until use. We tested the serum samples for the presence of HEV IgG and IgM antibodies by using an ELISA based on rat HEV-like particles, as described (3). Of the 260 samples, 27 (10.4%) were HEV IgG positive and 12 (4.6%) were HEV IgM positive. Of these, 3 IgG-positive and 1 IgM-positive samples were among the 113 samples (2.7% and 1.0%, respectively) collected from shrews in Chikan District, and 24 IgG-positive and 11 IgM-positive samples were among the 147 samples (16.3% and 7.5%, respectively) collected from shrews in 6 villages (124 total samples) and the pig farm (23 total samples) in Mazhang District. The IgG-positive rate was higher for shrews from Mazhang District than for those from Chikan District (p< 0.05); the rates of IgM-positivity did not differ significantly. The IgG-positive rate among the 6 villages varied substantially (8.3%–71.4%) (Technical Appendix Table 1 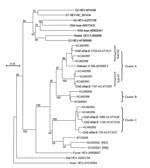 [PDF - 102 KB - 2 pages]). The length of the nested reverse transcription PCR products was 334 nt. After the primer sequences were removed, we sequenced the remaining 281 nt corresponding to nt 4107–4387 in the C-terminal open reading frame 1 of the rat HEV genome (GU345042) (GenBank accession nos. KC473527–KC473531). Phylogenetic analysis indicated that the 5 HEV isolates were all classified into the same group as rat HEV and clearly separated into 2 clusters, A and C. Cluster A isolates were further divided into 2 subclusters, sub-A1 (CHZ-sRat-E-1107) and sub-A2 (CHZ-sRat-E-1133) (Figure). Strains CHZ-sRat-E-739, CHZ-sRat-E-1086, and CHZ-sRat-E-1129 belong to cluster C. These findings are of limited precision because of the shot sequence that was analyzed, and, thus, they may not be predictive of results obtained with complete genomes.
Rat HEV isolated from the S. murinus shrews shared 77.4%–99.6% nt sequence identity with other rat HEV strains; the sequences were especially similar to those of HEV isolates from wild rats in this area (GenBank accession nos. KC465990–KC466001) (Technical Appendix Table 3

[PDF - 102 KB - 2 pages]). These results indicate that rat HEV infection occurs in S. murinus shrews and that these rodents are a reservoir for rat HEV.
Evidence indicates that rat HEV may be capable of inducing an immune response in humans; thus, this virus may be relevant to the epidemiology of HEV in humans (10). A key step in understanding this epidemiology is to know the reservoirs of rat HEV, especially reservoirs like S. murinus shrews, which live in close proximity to humans.

This study was supported in part by National Major Projects of Major Infectious Disease Control and Prevention, the Ministry of Science and Technology of the People’s Republic of China (grant no. 2012ZX10004213-004); the US Agency for International Development Emerging Pandemic Threats Program, PREDICT project (cooperative agreement no. GHN-A-00-09-00010-00); and grants for Research on Emerging and Re-emerging Infectious Diseases, Research on Hepatitis, and Research on Food Safety from the Ministry of Health, Labour and Welfare, Japan.