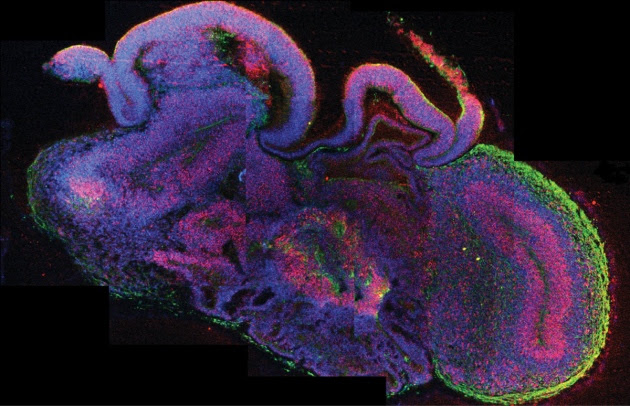 A cross-section of a brain-like clump of neural cells derived from human stem cells.
Madeline A. Lancaster

With the right mix of nutrients and a little bit of coaxing, human stem cells derived from skin can assemble spontaneously into brain-like chunks of tissue. Researchers provide the first description and application of these ‘mini-brains’ today in Nature1.
“It’s a seminal study to making a brain in a dish,” says Clive Svendsen, a neurobiologist at the University of California, Los Angeles, who was not involved in the study. “That’s phenomenal.” A fully formed artificial brain might still be years away, he notes, but the pea-sized neural clumps developed in this work could prove useful for researching human neurological diseases.

More related stories
Researchers have previously used human stem cells to grow structures resembling the eye2 and even tissue layers similar to the brain's cortex3. But in the latest advance, scientists developed bigger and more complex neural-tissue clumps by first growing the stem cells on a synthetic gel that resembled natural connective tissues found in the brain and elsewhere in the body. Then, they plopped the nascent clumps into a spinning bath to infuse the tissue with nutrients and oxygen.
“The big surprise was that it worked,” says study co-author Juergen Knoblich, a developmental biologist at the Institute of Molecular Biotechnology in Vienna. The blobs grew to resemble the brains of fetuses in the ninth week of development.

Under a microscope, researchers saw discrete brain regions that seemed to interact with one another. But the overall arrangement of the different proto-brain areas varied randomly across tissue samples — amounting to no recognizable physiological structure.

Ewen Callaway talks to Juergen Knoblich about the brain tissue growing in his lab.


Go to full podcast
“The entire structure is not like one brain,” says Knoblich, adding that normal brain maturation in an intact embryo is probably guided by growth signals from other parts of the body. The tissue balls also lacked blood vessels, which could be one reason that their size was limited to 3–4 millimetres in diameter, even after growing for 10 months or more.
Despite these limitations, the authors used the system to model key aspects of microcephaly, a condition that causes extremely stunted brain growth and cognitive impairment. Microcephaly and other neurodevelopmental disorders can be difficult to replicate in rodents because of species-specific differences in brain development.
The researchers found that tissue chunks cultured from stem cells derived from the skin of a single human with microcephaly did not grow as big as clumps grown from stem cells derived from a healthy person. They traced this effect to the premature differentiation of neural stem cells inside the microcephalic tissue chunks, depleting the population of progenitor cells that fuels normal brain growth.
The findings largely confirm prevailing theories about microcephaly, says Arnold Kriegstein, a developmental neurobiologist at the University of California, San Francisco. But, he adds, the study also demonstrates the potential for using human-stem-cell-derived tissues to model other disorders, if cell growth can be controlled more reliably.
“This whole approach is really in its early stages,” says Kriegstein. “The jury may still be out in terms of how robust this is.”