Genomics and Health ► Behavior, environment, and genetic factors all have a role in causing people to be overweight and obese

Behavior, environment, and genetic factors all have a role in causing people to be overweight and obese 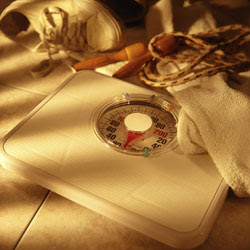 Obesity results from the energy imbalance that occurs when a person consumes more calories than their body burns. Obesity is a serious public health problem because it is associated with some of the leading causes of death in the U.S. and worldwide, including diabetes, heart disease, stroke, and some types of cancer.

Do Genes Have a Role in Obesity?

In recent decades, obesity has reached epidemic proportions in populations whose environments promote physical inactivity and increased consumption of high-calorie foods. However, not all people living in such environments will become obese, nor will all obese people have the same body fat distribution or suffer the same health problems. These differences can be seen in groups of people with the same racial or ethnic background and even within families. Genetic changes in human populations occur too slowly to be responsible for the obesity epidemic. Nevertheless, the variation in how people respond to the same environment suggests that genes do play a role in the development of obesity.

How Could Genes Influence Obesity?

Genes give the body instructions for responding to changes in its environment. Studies of resemblances and differences among family members, twins, and adoptees offer indirect scientific evidence that a sizable portion of the variation in weight among adults is due to genetic factors. Other studies have compared obese and non-obese people for variation in genes that could influence behaviors (such as a drive to overeat, or a tendency to be sedentary) or metabolism (such as a diminished capacity to use dietary fats as fuel, or an increased tendency to store body fat). These studies have identified variants in several genes that may contribute to obesity by increasing hunger and food intake.
Rarely, a clear pattern of inherited obesity within a family is caused by a specific variant of a single gene (monogenic obesity). Most obesity, however, probably results from complex interactions among multiple genes and environmental factors that remain poorly understood (multifactorial obesity).

Any explanation of the obesity epidemic has to consider both genetics and the environment. One explanation that is often cited is the mismatch between today’s environment and "energy-thrifty genes" that multiplied in the distant past, when food sources were unpredictable. In other words, according to the "thrifty genotype" hypothesis, the same genes that helped our ancestors survive occasional famines are now being challenged by environments in which food is plentiful year round.

Currently, genetic tests are not useful for guiding personal diet or physical activity plans. Research on genetic variation that affects response to changes in diet and physical activity is still at an early stage. Doing a better job of explaining obesity in terms of genes and environment factors could help encourage people who are trying to reach and maintain a healthy weight.

What about Family History?

How Can You Tell If You or Your Family Members Are Overweight?

> Read more about obesity and genomics…

For more information on obesity and genomics for consumers, please see our Genomic Resources Guide.