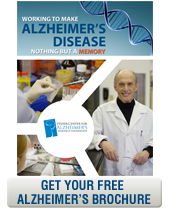 An experimental drug showed promise of slowing cognitive decline in people in the early stages of Alzheimer’s, though the benefits were modest and the drug did not meet its main testing goals in a study of patients with mild to moderate disease.
The findings provide some hope for new drugs aimed at beta-amyloid, a toxic protein that builds up in the brains of those with Alzheimer’s. Earlier this year, drug makers halted testing of a related drug called bapineuzumab, which had shown promise in early trials.
Current Alzheimer’s drugs may ease symptoms for a time, but they do nothing to stop the relentless downward progression of disease. New drugs like solanezumab are designed to halt disease progression, though so far results of most such drugs have been discouraging.
Scientists aren’t sure if beta-amyloid is a cause of Alzheimer’s or whether the toxic protein builds up as a side effect of the disease. In the current study, solanezumab provided hints of benefit in those in the earliest stages of Alzheimer’s, suggesting that the drug may be effective only before buildup of beta-amyloid becomes extensive.
In those with moderate disease, in which damage to the brain is more established, the drug did not appear to provide benefit.
The studies of solanezumab involved more than 2,000 men and women with mild or moderate Alzheimer’s disease who were enrolled in one of two clinical trials. Some received solanezumab for 18 months, while others got a placebo.
At the end of the study period, those treated with the drug fared no better than those getting the placebo in terms of memory or thinking skills or day-to-day functioning. However, when the results of the two trials were combined, creating a larger sample size, those with mild disease who were getting the drug showed a slowing in cognitive decline.
Further testing will be needed to determine whether the drug is truly effective for combating early Alzheimer’s. Many drugs show promise in early testing, only to prove ineffective in late-stage trials in large numbers of patients.
New trials of this and other experimental drugs are being planned to try to arrest the development of Alzheimer’s disease.
By www.ALZinfo.org, The Alzheimer's Information Site. Reviewed by William J. Netzer, Ph.D., Fisher Center for Alzheimer's Research Foundation at The Rockefeller University.
Source: Eli Lilly drug company.