CDC - Injury: The Leading Cause of Death for Persons 1-44 in U.S. - Injury Center

Injury: The Leading Cause of Death Among Persons 1-44

In 2007 in the United States, injuries, including all causes of unintentional and violence-related injuries combined, accounted for 51% of all deaths among persons ages 1-44 years of age – that is more deaths than non-communicable diseases and infectious diseases combined.

CDC - Injury: The Leading Cause of Death for Persons 1-44 in U.S. - Injury Center


The Burden of Injury and Violence: A Pressing Public Health Concern

Injury: The Leading Cause of Death Among Persons 1-44

Injury Deaths Compared to Other Leading Causes of Death for Persons Ages 1-44, United States, 2007*
Learn more
Motor vehicle crashes, falls, homicides, domestic violence, child abuse and neglect, and drug overdoses are just some of the tragedies we hear about every day in communities and on the news. Injuries and violence are widespread in society. Many people accept them as fate or as "part of life," but the fact is that most events resulting in injury, death or disability are predictable and therefore preventable.
The Centers for Disease Control and Prevention’s (CDC) National Center for Injury Prevention and Control (Injury Center) was established in 1992 to lead injury and violence prevention efforts. The field of injury and violence prevention is relatively young when compared to other areas of public health, but the burden of injury and violence coupled with the enormous cost of these problems to society make them a pressing public health concern.
Older adults and children are most vulnerable to sustaining injury requiring medical attention, but for Americans ages 1-44, injuries are the leading cause of death in the United States. For this reason, the Injury Center is leading a coordinated public health approach to injury and violence prevention, guided by the belief that everyone should have access to the best information and resources to help them live life to its fullest potential.


The Injury and Violence Prevention Challenge


"We have an obligation to promote safer environments where people can reach their fullest potential. The CDC’s Injury Center works to prevent the adverse health effects associated with injuries and violence in America." - Dr. Thomas Frieden, CDC Director

The Injury Center uses the same public health approach to preventing injuries and violence that has been proven to prevent diseases. It is one which recognizes that injuries and violence are preventable. They do not occur at random. This scientific model helps researchers describe the magnitude of the problem and the groups at risk; identify factors that increase or decrease the risk for injury and violence; explore ways to prevent them by designing, implementing and evaluating interventions; and promote the wide spread adoption of effective strategies, programs, policies and practices.


Describe and Monitor the Problem

June 18, 2008
Washington State
“I was delighted to see the Injury Center’s attention to older Americans, of which I am one. The CDC has huge potential to make a difference in Falls Prevention. I hope you will make it a priority.

Cheers,
June
The development and dissemination of uniform definitions for capturing information on injury and violence forms an important part of the Injury Center’s surveillance work. These efforts help us better understand the scale of the problem, where it is occurring, and who is most affected. Injury and Violence Data Systems improve the accessibility and quality of injury data. For example, the Web-based Injury Statistics Query and Reporting System (WISQARS) is an interactive application that provides customized reports on fatal and non-fatal injury to the public. WISQARS provides basic information on such factors as demographic characteristics of the person injured, the circumstances surrounding certain types of events (e.g., homicides, suicides) and the method of injury.

The Injury Center also supports the National Violent Death Reporting System (NVDRS), which is currently funded in 18 states. NVDRS links data from law enforcement, coroners and medical examiners, as well as from death certificates and crime laboratories, to offer a more comprehensive picture of the circumstances surrounding homicides or suicides in each state. Participating states can use these data to prioritize programs and policy interventions and to leverage additional funding to implement programs and other interventions that will have a positive impact on overall health.

Unintentional Poisoning is one example of an emerging public health threat that was identified by Injury Center surveillance data. For example, the age-adjusted unintentional poisoning death rate increased two fold from 2000 to 2006. Partly as a result of the growing abuse of prescription drugs, unintentional poisoning is now the leading cause of injury death surpassing unintentional motor vehicle traffic deaths for persons ages 35-54. A detailed examination of available data is critical to informing best practices to address this growing public health problem. At present, efforts are underway to identify and evaluate promising interventions in a number of states.

South Carolina
“To stop intimate partner violence, we must not only act responsibly and compassionately after violence has occurred, but work more diligently to prevent it from occurring in the first place. CDC’s DELTA Program is leading the way by promoting comprehensive strategies aimed at preventing first time victimization and perpetration.”

Preventing Falls: What Works—A CDC Compendium of Effective Community-based Interventions from Around the World describes fourteen scientifically tested and proven interventions to help older Americans remain self-sufficient and improve their quality of life. Every year, about 1 in every 3 adults, aged 65 years and older, suffers a fall, and in 2008, 2.1 million of those falls led to injuries severe enough to require medical treatment in a hospital emergency department. The CDC Compendium includes specific interventions that have rigorous scientific evidence of effectiveness and provides relevant information about these interventions to public health practitioners, senior service providers, and others who wish to implement fall prevention programs. In 2009, the Injury Center funded demonstration projects to inform the wide spread implementation of two programs included in the Compendium. The pilot programs in four states (CA, NY, OR, WI) will help identify the best methods for further implementation of these evidence-based programs through the public health system.


Assist in the Wide Spread Adoption of What Works

October 26, 2009
Kansas
"Thank you for your blog post on teen driver safety. Having a teen driving agreement that has the backing of the CDC seems so important to me. My daughter turns 16 in May and will be anxious to get her license. I will definitely use this driving agreement with my daughter.

Thanks so much,
Natalie
Graduated Drivers Licensing (GDL) systems are effective for preventing car crashes among teen drivers because they allow this high-risk group to gain initial driving experience under low-risk conditions. Motor vehicle crashes are the leading cause of death among U.S. teens, accounting for more than one in three deaths in this age group. Approximately 11 teens die in car crashes every day on U.S. roads. In addition to the personal and societal burden of such premature deaths, the cost of motor vehicle crashes involving drivers ages 15 – 19 was $7.4 billion in 2005. Injury Center funded research shows a 30% reduction in teen motor vehicle deaths in states where GDL laws are stronger, and GDL systems are associated with reducing injury crashes by up to 40%. In fact, many states are considering enacting tougher GDL laws. To further support policymakers’ efforts to save lives and reduce costs through GDL systems, the Injury Center authored a GDL Planning Guide to help states develop and implement an action plan or improve their existing GDL policies. The Injury Center also engages parents and caregivers through its communications campaign, Parents Are the Key, which informs parents of the steps they can take, including enforcing the provisions of GDL, to keep their teen driver safe.

Heads Up: Concussion in High School Sports and Heads Up: Concussion in Youth Sports are communication campaigns designed to reach coaches, parents and athletes at risk for sustaining a concussion. The campaigns and materials create awareness about the symptoms of a concussion and the risks of continued play when symptoms are present. Over 1.3 million copies of CDC’s “Heads Up” materials have been disseminated nationwide since 2005. The combined efforts of the Injury Center’s campaign and the work of its partners have led to the nation’s first sports concussion law, the Zackery Lystedt Law - enacted in the state of Washington in May 2009. Named for a young athlete who was permanently disabled after sustaining a concussion in 2006, the Zackery Lystedt law requires parents and athletes to read and sign a concussion information sheet prior to the start of each sports season. It further states that athletes participating in school sports who show signs of a concussion be removed from practice or play and that if a player is injured and taken out of play, permission from a licensed health care provider is required before the athlete is allowed to return to play. The Injury Center is currently investigating opportunities to evaluate the effectiveness of the “Zackery Lystedt Law” as part of an effort to determine the impact that sports concussion laws can have on improving safety in youth sports. 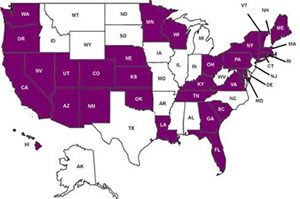 States in purple receive program funding
Nearly 50 million injuries occur each year in the United States. These injuries adversely impact the mental, physical, and economic well-being of individuals and their families, while the states in which they reside incur severe economic losses. States bear the economic burden of injuries and violence through increased costs for Medicaid, state employee health benefits, uninsured emergency care, child welfare services, and public safety costs. States also lose tax revenue when the injured and their caregivers miss work. Investing in ways to prevent injuries can save both lives and money. For example, cost/benefit analysis studies show that a $46 child’s car seat saves $1,900 in societal costs, and a $1,250 fall prevention program can avoid $10,800 in costs to society.

The Injury Center supports thirty states in its CORE State Injury (CSI) Program. Through the CSI program, states receive funding to collect data on injury and to formulate and evaluate policy interventions. This program, which is a dedicated injury prevention program at the state level, helps track regional differences in the sources of injury, identifies at-risk populations and target areas by geographic location, and determines the most effective solutions.

The Injury Center is committed to expanding its capacity to prevent injuries and violence, reduce physical and emotional consequences caused by injuries and violence, and lower the excessive costs resulting from injury-related medical treatment and lost wages. As additional resources become available, the Injury Center will work with its partners and states to enhance efforts in high-impact health areas and address new prevention needs that arise from emerging threats.

While injuries and violence cause death and disability, it is possible to prevent them.  For more information about injuries and CDC’s response, visit the following sites: