By Sally Robertson, BScJune 26, 2018
A new study from Harvard T.H. Chan School of Public Health has revealed that several types of cancer are more common among US flight attendants than they are among the general population. 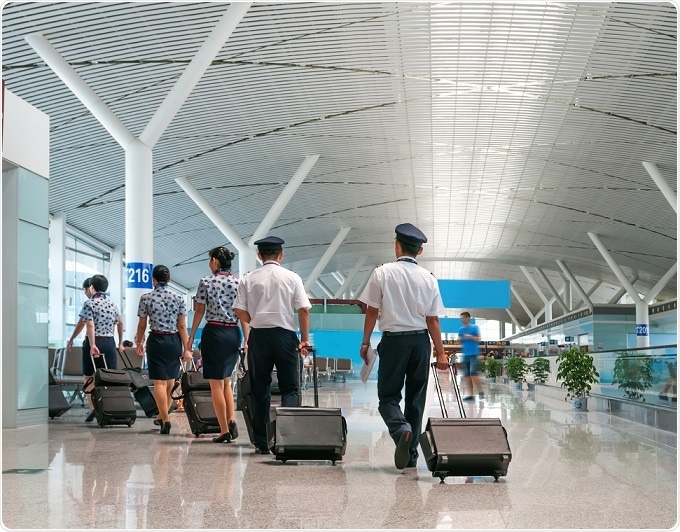 © hxdyl/Shutterstock.com
The authors of the research say the findings suggest that efforts should be made to reduce the risk of cancer among flight crew members.
The study showed higher rates of breast cancer, gastrointestinal cancer, cervical cancer, thyroid cancer, uterine cancer and non-melanoma skin cancer amongst the flight attendants.
Study author Irina Mordukhovich says:

Our findings of higher rates of several cancers among flight attendants is striking given the low rates of overweight and smoking in our study population, which highlights the question of what can be done to minimize the adverse exposures and cancers common among cabin crew."

Cabin crew members are regularly exposed to known cancer-causing factors such as cosmic ionizing radiation, sleep cycle and circadian rhythm disruption, as well as potential contaminants within the plane. Compared with other US workers exposed to radiation, cabin crews are subject to the largest annual ionizing radiation dose due to their exposure to cosmic radiation.
Although these risk factors are known, cabin crews have not previously been included in the Occupational Safety and Health Administration protections that usually help safeguard workers in the U.S. In 2014, some protections were introduced; however, these do not involve the monitoring or regulation of exposure to radiation.

As reported in the journal Environmental Health, study leader Eileen McNeely and team analysed a survey involving 5,366 US. flight attendants that was conducted between 2014 and 2015. The participants answered questions about their health outcomes and symptoms, personal characteristics, work experience and their history of employment in the aviation industry.
Cancer rates amongst the cabin crew were compared with those reported by around 5,000 U.S. residents in the National Health and Nutrition Examination Survey.
The findings revealed that the attendants had higher rates of every cancer assessed, particularly breast cancer, melanoma, and non-melanoma skin cancer among women.
The authors recommend that further efforts be made in the US to limit cancer risk among this work population such as radiation dose monitoring and the implementation of schedules that will lower exposure to radiation and prevent the disruption of circadian rhythms.
"The E.U. already evaluates radiation exposure among flight attendants, which our findings show may be an important step toward lowering cancer risk among this work population,” says McNeely.
Source:
Publicado por salud equitativa en 8:35