We conducted a 3-year longitudinal serologic survey on an open cohort of poultry workers, swine workers, and general population controls to assess avian influenza A virus (AIV) seroprevalence and seroincidence and virologic diversity at live poultry markets (LPMs) in Wuxi City, Jiangsu Province, China. Of 964 poultry workers, 9 (0.93%) were seropositive for subtype H7N9 virus, 18 (1.87%) for H9N2, and 18 (1.87%) for H5N1. Of 468 poultry workers followed longitudinally, 2 (0.43%), 13 (2.78%), and 7 (1.5%) seroconverted, respectively; incidence was 1.27, 8.28, and 4.46/1,000 person-years for H7N9, H9N2, and H5N1 viruses, respectively. Longitudinal surveillance of AIVs at 9 LPMs revealed high co-circulation of H9, H7, and H5 subtypes. We detected AIVs in 726 (23.3%) of 3,121 samples and identified a high diversity (10 subtypes) of new genetic constellations and reassortant viruses. These data suggest that stronger surveillance for AIVs within LPMs and high-risk populations is imperative.
Avian influenza A viruses (AIVs) remain an important threat to human health. With new strains widely circulating in China, an increasing number of human infections with AIVs have been reported since 2013, including subtypes H7N9, H5N6, and H10N8 (1–3). In addition, more human infections with H9N2 have been reported since 2014 (4). Although no sustained human-to-human transmission has been observed for these viral subtypes, serious concern exists that the virus could become more efficient in causing human epidemics (5).
Most human infections with AIVs (e.g., subtypes H7N9, H5N1, and H5N6) have been associated with exposure to poultry and resulted in severe illness (6). However, these severely ill patients could represent the tip of the iceberg because mild and asymptomatic infections with H7N9, H9N2, and H5N1 subtypes have been observed by surveillance (7–11) and serologic studies (12–18). Surveillance might miss persons with mild or asymptomatic infection who do not seek medical care. Cross-sectional serologic studies have limited value for measuring incidence rates of AIV infections, resulting in poor understanding of the prevalence of infection and the proportion of cases that are mild or subclinical in humans.
The southern provinces of China have a high density of poultry and humans and are considered likely hot spots for the emergence of new reassortant influenza viruses (19). China’s Jiangsu Province, one of the hot spots, has reported human infections with H7N9 and H5N1 subtypes. We conducted a 3-year longitudinal serologic study to estimate the seroprevalence and seroincidence of H7N9, H9N2, H5N1, and H5N6 subtypes among animal (poultry and swine) workers and general population controls and to identify the risk factors for seropositivity or seroconversion. We also conducted longitudinal surveillance to measure the diversity and genetic variation of AIVs at live poultry markets (LPMs) in the city of Wuxi, Jiangsu Province, China.

During July 2013–September 2016, we conducted a longitudinal serologic survey among an open cohort of poultry and swine workers and general population controls in Wuxi. We recruited workers who were >18 years of age and were exposed to poultry and pigs or to poultry and pig manure as part of their daily activities (e.g., husbandry, slaughtering, sales). In addition, we recruited control participants from residents at community service centers who reported having no exposure to poultry or pigs or to animal manure as part of their daily activities. After enrolling participants in July 2013, we conducted follow-up visits at 1, 2, and 3 years. Because poultry and swine workers in China are often temporarily employed and different workers might be present each year, prospective follow-up of the same persons over the study period was not always feasible. Therefore, we enrolled new participants at each follow-up visit to maintain the number of active cohort participants at ≈2,000.
At participant enrollment, we used a comprehensive questionnaire to collect demographic data, exposure variables, information about any history of chronic medical conditions, influenza vaccination history, self-reported influenza-like illness during the past 12 months, and the extent and nature of exposure to animals or animal manure. At each follow-up visit, we used a shorter questionnaire to collect additional demographic data, recent history of exposure to poultry or pigs, and self-reported recent influenza-like illness. At enrollment and follow-up visits, we asked each participant to provide a 5-mL blood sample.
We obtained written informed consent from all participants before conducting interviews and collecting samples. The institutional review boards of the Beijing Institute of Microbiology and Epidemiology (no number given) approved the study protocol.

Poultry and Environmental Surveillance of AIVs 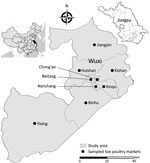 Figure 1. Location of the study area where participants were enrolled and of live poultry markets where the environmental and cloacal swab sampling was conducted in 9 districts of Wuxi, Jiangsu Province, China,...
During the serologic study period, we also conducted prospective surveillance of AIVs at 9 LPMs in 9 districts of Wuxi (Figure 1). Once each month, we collected ≈54 cloacal swab samples (6 samples from each LPM) from chickens, ducks, or geese and preserved each sample in a tube containing 3 mL of viral transport medium (MT0301; Yocon, Beijing, China). In addition, 18 of each type of environmental swab and fecal/slurry samples were collected (2 samples of each type from each LPM). We collected environmental samples by swabbing surfaces of chicken epilators, chopping boards, cages, and sewage 4–8 times with separate cotton-tipped swabs. We then inserted the swabs into a tube containing 3 mL of viral transport medium (Yocon). Fecal (1 g) or slurry (1 mL) samples were collected at available sites and were diluted in viral transport medium (Yocon).

All blood, cloacal, and environmental specimens were kept on frozen cold packs at 2°C–8°C after collection and transported to the local Center for Disease Control and Prevention laboratory. Serum was separated by centrifugation for 5 min at 2,000 rpm. Cloacal and environmental specimens were vortexed, and swabs were discarded. For the fecal/slurry specimens, we conducted an extra centrifugation for 5 min at 2,000 rpm to separate the mixture of virus and viral medium. Each type of specimen was split into 3 aliquots and frozen at −80°C until use.
We first screened all serum samples by hemagglutination inhibition (HI) assay (20), and samples with an HI titer >10 were tested by a microneutralization (MN) assay (21). Considering the prevalence of avian-lineage viruses in China and their availability, we used a human H7N9 isolate (A/Jiangsu/Wuxi05/2013), clade 2.3.4.4 H5N6 virus (A/chicken/Jiangsu/WXBING2/2014), clade 2.3.2.1c H5N1 virus (A/chicken/Jiangsu/WX927/2013), and Y280-like H9N2 virus (A/chicken/Jiangsu/WXWA021/2013) for HI and MN assays. We defined a seropositive result as an MN titer >80 for all tested viruses. Seroconversion was defined as detection of a >4-fold rise in MN antibody titer between initial serum sample and a paired second serum sample, with the second sample achieving a titer >80. Additional details for the HI and MN assays, PCR detection, viral isolation, sequencing of the cloacal and environmental samples, and the phylogenetic analysis of the AIVs we identified are available in the Technical Appendix. We deposited sequence data in the GISAID database (http://platform.gisaid.org; accession nos. EPI_ISL_277027–277050, 277052–277064, and 277093–277127).

We calculated the proportion (and associated 95% CIs) of poultry workers, swine workers, and control participants who were seropositive or seroconverted. We estimated the incidence of seroconversion per 1,000 person-years (and associated 95% CIs) for participants with multiple longitudinal serum samples using the time between baseline and follow-up as their person-time contribution. We excluded participants who were seropositive at baseline. We analyzed categorical and continuous variables using the χ2 or Fisher exact test and the Student t-test where necessary. Risk factors for virus infection (any seropositivity or seroconversion for each individual) were assessed only among participants with paired serum samples using logistic regression models after adjustment for sex and age group or variables with p values <0.05, summarized by odds ratios (ORs) with 95% CIs. Exact Poisson regression model was used to explore the effect of exposure on 1,000 person-year incidence in the cohorts, assessed by incidence rate ratios with 95% CIs. All tests were 2-sided with a 0.05 level of significance. Analyses were performed using SPSS software version 16.0 (SPSS, Chicago, IL, USA).
Top

Diversity and Reassortment of AIVs at LPMs 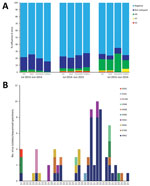 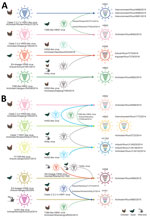 Figure 4. Probable genesis of reassortant influenza A viruses, Wuxi, Jiangsu Province, China, 2013–2016. A) Internal gene reassortment; B) hemagglutinin, neuraminidase, and internal gene exchanges. Virus particles are represented by ovals containing horizontal...
During the study period, we collected and screened 3,121 samples from 9 LPMs for IAVs. A total of 466 (23.2%) of 2,010 cloacal swab samples, 145 (24.5%) of 590 environmental swab samples, and 115 (22.0%) of 521 fecal/slurry specimens were positive for influenza A (Figure 3, panel A). Single infection with H9, H7, and H5 subtypes was detected in 229 (31.5%), 27 (3.7%), and 25 (3.4%) of 726 AIV-positive specimens, respectively. Sequencing results of 45 isolated strains and 33 original specimens (Technical Appendix Table 3) showed that 10 AIV subtypes were detected in LPMs (Figure 3, panel B). To further study the origin of these 10 subtypes, we performed a detailed phylogenetic analysis for all available gene segments (Technical AppendixFigure). The analyses revealed multiple gene segment exchanges among and within subtypes or interspecies among those circulating in domestic and wild birds, resulting in new genetic constellations and reassortant viruses, which we have represented schematically (Figure 4). Overall, 2 reassortment models were observed for these viruses. The 1 reassortment model mentioned only internal gene reassortment (Figure 4, panel A), such as the matrix (M) gene of 3 H5N1 (A/environment/Wuxi/4689/2015, A/environment/Wuxi/5068/2015, and A/environment/Wuxi/5081/2015) and 1 H5N2 (A/chicken/Wuxi/6462/2015) virus originating from Y280-like H9N2 viruses, the polymerase basic 2 gene of 1 H9N2 (A/chicken/Wuxi/6082/2015) virus from A/chicken/Zhejiang/7450/2015 H5N2-like virus, and all internal genes of 2 H3N8 (A/duck/Wuxi/7275/2016 and A/goose/Wuxi/7276/2016) viruses multireasserted from chicken or wild bird HxNy–like virus. The other reassortment model included multireassortment involving both the surface protein genes (hemagglutinin [HA], neuraminidase [NA], or both) and internal genes among the different subtypes or lineage and interspecies (Figure 4, panel B). The HA gene of 3 H5N2 viruses originated from clade 2.3.4 H5N2 (A/chicken/Wuhan/HAQL07/2014) or clade 7 H5N1 (A/chicken/Zhejiang/7450/2015)-like viruses and the HA gene of 3 H11N2 viruses from A/duck/Jiangxi/22537/2012-like H11N9 virus, the NA gene in all of them was originated from HxN2-like viruses. The 1 H3N8 virus (A/chicken/Wuxi/4859/2015) also had multireassortments that the HA and NA were respectively generated from the HA of Eurasian (A/duck/Jiangsu/26/2004) and North American lineage (A/pintail/Alberta/232/1992) H3N8-like virus, and the internal genes were reassorted with 6 subtypes circulating in ducks and wild birds. The HA of H1N2-like virus (A/Anseriformes/Anhui/L6/2014), the NA of clade 2.3.2.1c H5N1-like virus (A/chicken/Wuhan/HAQL07/2014), and the M gene of Y-280 lineage H9N2-like virus (A/chicken/Shandong/wf0202/2012) reassorted and generated new H1N1 virus (A/chicken/Wuxi/5682/2015).
All H5 subtypes possessed a polybasic amino acid residue at the cleavage site (RERRRKR/GL), indicating they were highly pathogenic in chickens, whereas the other subtypes were low pathogenicity (Technical Appendix Table 3). We detected the HA Q226L (H3 numbering) mutation in 4 H7N9 and all H9N2 viruses, indicating a binding ability to the human-like receptor. However, all subtypes had no polymerase basic 2 E627K and D701N mutations. All H7, H9, and H5 subtypes had the deletion in NA stalk associated with enhanced virulence in mice, as well as adaptation and transmission in poultry. All H9N2 viruses had oseltamivir resistance mutations of R292K in NA (N2 numbering), and adamantine resistance-associated mutation of S31N of M2 protein in 2 H5N1 and all H5N2, H1N1, H7N9, and H9N2 viruses.
Top

We thank the staff of Wuxi Center for Disease Control and Prevention for sampling and all participants for their cooperation.
This study was supported by the National Natural Science Foundation of China (81402730, 81773494, and 81621005), the Beijing Science and Technology Nova program (Z171100001117088), the Program of International Science and Technology Cooperation of China (2013DFA30800), the China Mega-Project on Infectious Disease Prevention (2017ZX10303401-006), and the National Institute of General Medical Sciences MIDAS grant (U54-GM111274).
Top