Cold and influenza season is underway – and it’s nothing to ‘shake off’ | Health.mil

Cold and influenza season is underway – and it’s nothing to ‘shake off’ | Health.mil 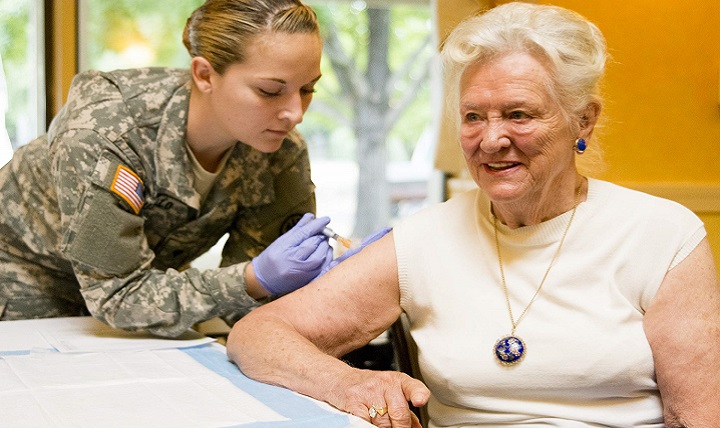 Cold and flu season usually runs from October to March, and peaks between December and February. Young children, adults 65 years and older, pregnant women, and people with chronic medical conditions have a higher risk for complications. Military Health System experts encourage everyone to take steps to prevent these viral illnesses from spreading. (U.S. Army photo by photo by Rachel Larue)


the holiday season is a wrap, but cold and influenza season is well underway. These viral illnesses can be picked up anywhere, anytime. Military Health System experts work hard to help prevent them – especially during the critical winter months.
“The flu is really nothing to shake off,” said Lia Anderson, a clinical nurse specialist at Fort Belvoir Community Hospital in northern Virginia. Flu season typically runs from October to March in North America, and peaks between December and February. In other words, now. “The infection can be severe and, if you are compromised in any way, it has the potential for being life threatening,” she said.
Cold and flu, while sometimes used interchangeably, are respiratory illnesses caused by two different viruses, said Anderson.
According to the Centers for Disease Control and Prevention, a cold can cause a stuffy or runny nose, cough, scratchy throat, and watery eyes. Over-the-counter medications can help alleviate symptoms, but colds generally run their course without severe complications.
The flu can also cause a runny or stuffy nose and cough; however, flu symptoms tend to be more intense. According to the CDC, most people with the flu will recover within several days or less than two weeks, but some can develop complications. Young children, adults 65 years and older, pregnant women, and people with chronic medical conditions have a higher risk for complications.
Lt. Cdr. Jaime Vega, the Navy Bureau of Medicine’s public health officer, said that waking up with sudden-onset fever, fatigue, chills, muscle pain, joint pain, and body aches can be an indication that you’re facing more than just a cold. It could be influenza. He recommends seeing a physician if these symptoms continue for more than 24 to 48 hours.
“If you have a fever that won’t go down with regular use of over-the-counter medication after about two days, I’d say that’s probably a pretty good indicator to be seen by a provider,” said Vega. If the flu is diagnosed early enough, certain medications can help shorten its course, he added.
Practicing good health habits, such as washing hands frequently and getting plenty of sleep, can help all ages stay strong and healthy throughout the season, said Vega. Eating a balanced diet, reducing stress, drinking plenty of fluids, and exercising daily builds strong immune systems. He stressed that the best way to prevent the flu is by getting the flu vaccine.
“It’s never too late to get vaccinated for seasonal flu,” said Vega, noting that it takes a full two weeks for your body to develop its own immunity to influenza from the vaccine. The CDC recommends anyone six months and older get vaccinated.
Exceptions to vaccination include those with allergies to vaccine ingredients, patients undergoing chemotherapy, and children younger than six months. Anderson recommends staying home when sick, avoiding contact with someone who is ill, and disinfecting surfaces to decrease the spread of seasonal illnesses.
“We’re into our [peak] season, so we’re going to see a lot more flu activity coming up,” said Anderson. “You spread it to one person who spreads it to two people who spreads it to four people. Getting vaccinated is not about the individual, it’s about the community.”

Joint efforts in search of a cure for tropical diseases

Guarding the health of service members

It's not about the item we touch, it's about the patient that uses it
Recommended Content:
Health Readiness

A new year, a new you: Take command of your health

Regardless of procedure or patient, every incision is an exercise in mission readiness
Recommended Content:
Military Hospitals and Clinics | Health Readiness

According to the American College of Nurse-Midwives, in 2014, 8.3 percent of all U.S. births were delivered by CNMs
Recommended Content:
Children's Health | Women's Health
Publicado por salud equitativa en 4:31