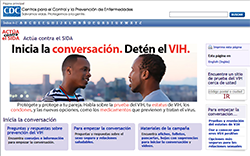 In December 2014, the CDC released the Spanish-language version of the Start Talking. Stop HIV. campaign, Inicia la conversación. Detén el VIH. Since its launch in May 2014,Start Talking. Stop HIV. has had incredible success promoting communication between gay, bisexual, and other men who have sex with men (MSM) about HIV risk and prevention strategies. This multifaceted social marketing HIV prevention campaign aims to reduce new HIV infections among gay, bisexual, and other MSM by encouraging open discussion about a range of HIV prevention strategies and related sexual health issues between sex partners. Learn more…

Save the Date for the 2015 National HIV Prevention Conference

We are pleased to announce that the 2015 National HIV Prevention Conference will be held December 6–9, 2015 in Atlanta, GA! It is the preeminent conference for state and local health departments, community-based organizations, federal agencies, researchers, clinicians, people living with HIV, and others to share the latest advancements, strategies, and accomplishments in HIV prevention and care. Learn more… 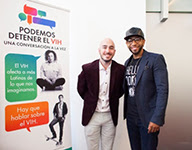 As part of the rollout of CDC’s We Can Stop HIV One Conversation at a Time/Podemos Detener el VIH Una Conversación a la Vez campaign, CDC collaborated with national partners MTV Tr3s and Pan American Development Foundation. Find out about how CDC and its partners developed community engagement programming aimed to inform, inspire, educate, and illustrate effective conversations about HIV/AIDS prevention among Hispanics/Latinos, with the hope of empowering Hispanics/Latinos to begin conversations about HIV. Learn more…

Encouraging People Living With HIV To Get in Care, Stay in Care, and Live Well

CDC’s HIV Treatment Works campaign, aimed at encouraging those who are HIV positive to get in care, stay in care, and live well, officially kicked off on September 17, 2014, at United Medical Center in Washington, DC. Atlanta and Miami were also the focus of the campaign’s recent pre- and post-launch community engagement efforts. Learn more…

CDC Partners With Positively Aware To Celebrate A Day With HIV

In September 2014, people everywhere, both HIV-positive and -negative, joined the fight against HIV by participating in A Day With HIV. The A Day With HIV campaign is designed to help fight the stigma around HIV and advance a community of caring. CDC’s Let’s Stop HIV Together campaign partnered with Positively Aware’s A Day With HIV campaign to extend shared messages and the reach of both campaigns. Learn more…

The Positive Women’s Network – USA held “SPEAK UP! A National Leadership Summit for Women Living With HIV!” in September 2014 in Fort Walton Beach. This first-ever national Summit hosted more than 200 women living with HIV from across the country. The goals of the Summit were to build leadership skills; address critical policy, advocacy, and research issues; and foster a community among women living with HIV. Learn more…

Act Against AIDS Leadership Initiative Partner, “I Choose Life,” Teams Up With the City of Inglewood

In November 2014, more than 200 people attended the “I Choose Life Health and Wellness Center and Cover California Kick Off Enrollment and Free Health Fair” in Inglewood, CA. The event was hosted by CDC’s Act Against AIDS Leadership Initiative (AAALI) partner “I Choose Life” (ICL). Learn more…

AAALI partner, the Congressional Black Caucus Foundation, collaborated with Howard University for the 5th Annual International Conference on Stigma, “Lean on Me! Standing Together for Human Rights in Health.” Learn more…
....

Direct from the Division Director’s Office

On December 1 each year, people across the world unite in celebration of World AIDS Day. Despite many advances in HIV prevention, treatment, and care since the early days of the epidemic, HIV and AIDS continue to be a major global health issue. The 2014 World AIDS Day theme, “Focus, Partner, Achieve: An AIDS-Free Generation,” tells us that together we can win the fight against HIV and AIDS. In observance of World AIDS Day 2014, CDC conducted several activities, including a Twitter chat, a badge on Flickr, infographics, a social photo promotion, and much more. Learn more…
....

February 7 is National Black HIV/AIDS Awareness Day (NBHAAD), a day when people come together to acknowledge the impact of HIV and AIDS on the African-American community. Join us on February 7 in recognition of NBHAAD by getting tested for HIV, encouraging your friends and family to get tested for HIV, and speaking up against the stigma that often prevents people from getting tested and seeking treatment. Learn more…
....