Robert received years of antibiotic treatment for “chronic Lyme disease”. Over time, his symptoms worsened and he began to lose sight in his right eye. To hear more about his illness and find out the real cause of his vision loss, watch Robert's story at: http://www.cdc.gov/lyme/treatment/Stories/index.html#Robert
Additional personal stories of Lyme disease include:

One Man's Experience with Lyme Disease

John got Lyme disease on a camping trip with his son. He talks about his early symptoms and his diagnosis by his physician, Dr. Heaton. 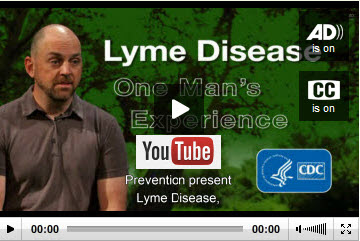 Dr. Heaton talks about some common concerns that patients have with Lyme disease and where it occurs.  John follows up with some tips for avoiding tick bites and Lyme disease.
Read Transcript
Top of Page

A Summer for Healing

Heather got Lyme disease vacationing on the Massachusetts coast.  Her recovery took longer than she'd expected. 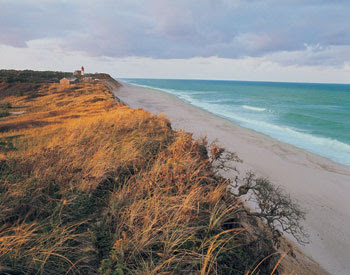 Heather has always loved the outdoors, and she especially enjoys summertime vacations with her family on the Massachusetts coast. The beautiful beaches, grassy dunes, and wildlife make this a special place for her.
After graduating from high school in June, Heather and her family traveled to their annual vacation spot and had a great time as always. However, a couple of weeks after returning home, she woke up with aching in her back, hips, and legs.  “My joints just seemed very stiff and creaky” she explained. In addition to the pain, she also had a fever and felt very run down.
Heather’s family has a history of juvenile rheumatoid arthritis (JRA), so her mother quickly became concerned.  Heather went to their family doctor, who examined her and found a bull’s-eye rash around her belly button.  “I hadn’t even noticed the rash!” Heather said. Since she had so many symptoms typical of early Lyme disease and had been in an area where Lyme disease was common, the doctor diagnosed her with Lyme disease in the office and didn’t order any blood tests. Heather’s mother, though alarmed that Heather had Lyme disease, was greatly relieved to find out that she didn’t have JRA.
After taking the prescribed course of antibiotics, her fever went away and she felt a bit better. However, her joint pain did not improve much and actually got worse over time. She had a lot of swelling in her knees; her hips and back still hurt. The doctor prescribed a second course of oral antibiotics, which is sometimes recommended for people with Lyme disease whose joint symptoms do not improve after the first round of antibiotics.
Heather’s joint pain eventually improved, but she continued to feel tired and lethargic for the rest of the summer. Although she wanted to be outside running or rock climbing, she just didn’t have the energy that summer. It wasn’t until fall (about 3-4 months later) that she was able to resume her normal, active lifestyle.
“I wanted to share my story to let people know that it can take a long time to feel better after having Lyme disease. Even though you might want to get out and climb a mountain, your body needs time to recover from what it’s been through.” Knowing how long her recovery took, she’s more careful than ever about preventing tick bites. She tries to check herself for ticks every day, and her dog now wears a tick collar and gets frequent tick checks too!
Top of Page

Laura got Lyme disease during a family camping trip. She never saw a tick or a rash and didn't have symptoms until she suddenly experienced very serious knee and joint pains.

Laura is a busy employee of a Colorado non-profit organization. One day in August, while walking up a flight of stairs, she suddenly began to experience pain in both knees and stiffness throughout her entire body. Her friends teased her about being out-of-shape, but as a young and active woman, she was worried.  The next day, while riding her bike, her knees began to hurt so badly, she wondered if she’d make it home. On the third day, she didn’t even want to get out of bed. Everything hurt—her knees, ankles, wrists, and shoulders. Just walking to the bathroom was a painful ordeal.
When she saw her doctor a few days later, he asked her a series of questions, including, “Have you taken any vacations?”
Why yes, she had.  The previous month, Laura had gone on her family’s annual camping vacation on Assateague Island, Maryland, home of the famous wild ponies. Her doctor decided to test her for Lyme disease and other ailments.

Laura thought back to her vacation and remembered the park ranger in Maryland warning her family about ticks. Could she have Lyme disease? She’d seen ticks crawling near the campsite, but she hadn’t found any ticks on herself. And like nearly a third of Lyme disease patients, she did not recall getting the telltale bull’s-eye rash of Lyme disease.
Two days later, her blood test came back positive for Lyme disease. Laura began taking antibiotics immediately. She started doxycycline on Wednesday and by the next day, she felt slightly better. By Friday, she could navigate steps, slowly and painfully. Progressively her pain subsided, a bit each day. Within a week, she was back to her usual routine.
Laura remains thankful for her doctor’s care. She’s not going to let fear of Lyme disease stop her from attending the next family camping trip; however, she plans to use repellent on her skin and possibly wear permethrin-treated clothing. And now she knows how Lyme disease feels, so if she gets it again, she won’t delay a trip to the doctor. “If you think you have it, go in. Don’t ignore the signs.”
Top of Page

Linda got Lyme disease once but was later bitten by another tick.  Read her story to find out how she felt and why it's important to remain vigilant against ticks.

“I’ve had Lyme disease two times. The first time was in 2001. I likely got the tick playing in the yard with my daughter. We live in Maryland and we back up to park land. Deer are plentiful.
I developed a bull’s-eye rash, first on the back of my knee, followed by one on my lower back a few days later. I had heard that a rash could be associated with Lyme disease so I looked up Lyme disease on the internet.  I also read about the symptoms and testing. The information on the CDC website advised me to go to the doctor and share my symptoms and ask about testing. After reading the information, I went to the doctor and they took a blood sample. I never found a tick.
About 5 days later, before the test results even came back, I began to develop flu-like symptoms. I remember the symptoms coming on quite rapidly one morning. By early afternoon, I was quite sick with a high fever. It was a Saturday, so I drove myself to the afterhours care at our HMO.  I remember having a horrible headache; the worst one I have ever had and all my muscles hurting. Because I was so ill and all my symptoms were consistent with Lyme infection, the doctor put me on antibiotics right away--even though the test results were not yet back. The test did eventually come back positive. My symptoms cleared up very quickly, within a couple of days. I have no lingering symptoms at all.
I got Lyme disease a second time about 3 or 4 years ago. I had what appeared to be a scab on my hip that wouldn’t go away. I finally picked the scab off; later I realized that the scab was probably a tick.  I had a small rash that developed around where the scab had been and showed it to my friend who is a physician’s assistant. She suspected that it could be Lyme. I made an appointment with my doctor who ordered a test. He prescribed antibiotics even before the test results came back positive.  Because I took the antibiotics right away, I never got sick like I did the first time and never had any other symptoms.
I am always very wary of going outside in the spring, summer and fall without repellent. So many people in our neighborhood have had Lyme disease and the deer population has grown in the last 10 years, so I always feel a bit concerned; more so for my children than for me.  I insist they have on bug spray when playing in the yard and always check them for ticks every night when they have played outside.
It’s so important to get accurate information about the signs of Lyme disease. If someone suspects they have been bitten by a tick or have a suspicious rash, the best advice I can give is to not wait to see your doctor. If it is Lyme disease, the sooner you can be diagnosed and treated, the less likely you are to develop more serious symptoms.”

Robert received years of treatment for “chronic Lyme disease”. Over time, his symptoms worsened and he began to lose sight in his right eye. He was diagnosed with a pituitary tumor. Due to the increase in growth hormone levels during the three years he was improperly treated for Lyme disease, Robert has permanent musculoskeletal changes and suffers from heart disease, joint pain, and severe obstructive sleep apnea.