My story of living with cone-rod dystrophy

Dear reader,
It all started when as a six-and-half year old, I wanted to show my progress in reading to our neighbors and they wondered why I had to hold the newspaper 10 cm in front of the eyes. Visits to the eye doctor followed, however, they did not yield any result and my parents were told that my eyes were perfectly healthy. This raised the suspicion that I was just acting. Two years later, I was diagnosed with a juvenile retinal disease.
Written by michael_emmerich, published 16 days ago. 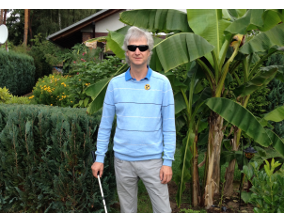 Unlike my parents, who were apparently shocked by this news, I was actually pretty glad that they now believed me and took my problems seriously. What this diagnosis would mean to me, I could not even imagine at that time.
By fifth grade, the disease was so far along that I could not even read my own handwriting. However, as I have always been an optimist, I somehow always assumed that my vision would not deteriorate further. Finally, I remained in the normal school until the completion of the tenth grade, about which I am very happy today. Since I still live in my old residential area, I have many friends in my neighborhood since my school years and who are very important to me.

At about 18 years old, I felt that the disease had come to a standstill. I would say that up to 30 years of age, for long periods, I felt that everything was normal. But when I went to places I had not seen for many years, I realized that was not the case. At some point, I think when I was 32 ​​years old, unfortunately I came up with the idea of taking vitamin A, as I learned from a study on this topic. Berson et al reported in 1993 that the common forms of retinitis pigmentosa (RP) could be slowed down by treating with 15,000 units of vitamin A palmitate per day. As CRD was still referred to as a form of RP at that time, I assumed that this recommendation applied to me also. At that time I still had a residual vision of about 10 percent, which was exacerbated after I took vitamin A. Meanwhile, studies have shown that high-dose intake of vitamin A in CRD patients may have a harmful effect and is strongly discouraged. But for me, this realization came too late.
That was a hard turning point. Besides reading, I had few limitations in daily life until then. But it was very stressful not to be able to find my way in in unfamiliar surroundings. I then decided to apply for a guide dog, with whose help I was able to regain some of my independence back.
Because I did not want to accept passively that my sight was worsening, I began to inform myself intensively about research results and became a member of the self-help organization PRO RETINA Germany. There I built the CRD patient group and founded the working group "Rare diseases". As there was no detailed information until then for lay patients about the clinical picture of CRD, I decided to write a booklet about this topic. This is available since 2010 and can be sent by me on request. Meanwhile, I am in charge of the "Diagnosis-specific advice" department of PRO RETINA, in which there are 13 patient groups, of which 12 are among rare retinal dystrophies.
Today my sight is less than two percent, although it is more likely to be going down to one percent. Actually, I never thought that my vision would get so impaired. But I firmly believe that soon initial treatments will be available that can halt the progression or at least slow it down. Luckily, the retina chip is now so far advanced that I really should not fear that eventually I will not be able to see anything. At the moment, I can orient myself pretty well in enclosed spaces, as the artificial light is not so bright. But as soon as I leave the house, it is very problematic for me. I've just bought a navigation system, which I can fully operate with voice control. Although it is not particularly reliable, at least I know where I am and where I have to go. Also, wearing extremely dark sunglasses, like the ones used in welding, lets me see even in bright sunlight, with the remaining vision that I have.
Actually, in recent years, there have been highs and lows constantly, during which I have coped, sometimes well and sometimes not so well, with my visual impairment and the resulting problems. But there was always a solution for everything, which was indeed tedious, but time and again I have felt that it can be overcome. I think that you somehow grow because of it. You become open and see the world through different eyes.