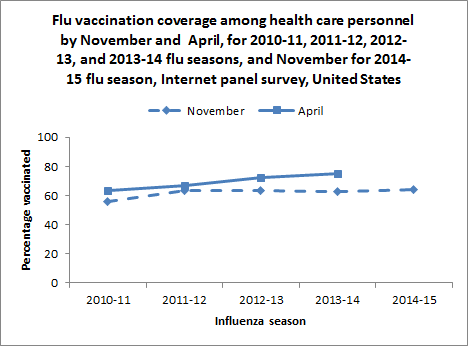 Influenza (flu) among health care personnel (HCP) can result in medical visits and lost work days for the HCP and has the potential to spread flu to patients and other HCP, including those with chronic medical conditions, pregnant women, young children, and older people at higher risk of serious flu complications.

Footnotes | Data Source and Methods | Limitations
Influenza (flu) among health care personnel (HCP) can result in medical visits and lost work days for the HCP and has the potential to spread flu to patients and other HCP (1), including those with chronic medical conditions, pregnant women, young children, and older people at higher risk of serious flu complications.
CDC analyzed data from an Internet panel survey conducted from October 29-November 12, 2014, among HCP. The results of this survey provide information for use in vaccination campaigns during National Influenza Vaccination Week (December 7-13, 2014). This report provides early flu season (early November) estimates of vaccination coverage among HCP. Final 2014-15 flu season HCP vaccination coverage estimates will be available after the end of the season.

Coverage by Employer Requirement or Recommendation

Main Reason for Not Receiving Vaccination

What Can Be Done? (Recommendations)

CDC collected data from two pre-existing web-based panels from October 29–November 12, 2014. Clinical personnel were recruited from the membership of Medscape, a web portal managed by WebMD Professional Services, and non-clinical personnel were recruited from SurveySpot, a general population Internet panel. The sample was weighted to reflect the demographic composition of the target population of U.S. HCP. Survey items included vaccination during the current flu season, vaccination history, and knowledge, attitudes, and beliefs concerning flu and flu vaccination. There were 1,952 HCP who were eligible for and entered the survey and 1,908 (97.7%) of those completed the survey. Weighted estimates were calculated based on each occupational group by age, gender, race/ethnicity, health care work setting, and Census region to be generalizable to the U.S. population of HCP.
Weighted analyses were conducted using SAS v9.2 survey procedures. Because the opt-in Internet panel sample is based on those who self-selected for participation in the panels rather than a random probability sample, statistical measures such as calculation of confidence intervals and tests of differences cannot be performed (12). A difference of 5 percentage points was considered a notable difference.

* The methods used in the Internet panel survey differ from those of the NHIS; thus, results from the Internet panel survey should not be directly compared to the Healthy People 2020 target.
† Includes allied health professionals, dentists, technicians, technologists, emergency technicians, EMTs, and paramedics.
‡ Respondents could specify working in more than one setting.
§ Includes dental offices, pharmacies, emergency medical services locations, and other health care settings.
|| Single top main reason.
¶ Among respondents, 21.0% initially selected “I just don’t want the vaccine” as their main reason for not being vaccinated. When these persons were asked in a follow-up question to identify a more specific reason for not wanting the vaccine, 40.7% replied “I don’t need it,” 30.9% said “I don’t think the ingredients in the vaccine are good for you,” 16.7% said “I don’t think that flu vaccines work,” and 10.5% said “I might get sick from the vaccine.”
** Includes respondents who have not received the flu vaccine since July 2014 and who reported that they probably or definitely do not intend to be vaccinated in the 2014–15 flu season.
Publicado por salud equitativa en 7:30