The start of our ED journey - Ectodermal Dysplasia community - RareConnect

The start of our ED journey - Ectodermal Dysplasia community - RareConnect

The start of our ED journey

‘I don’t think he will get any teeth and I think he might have a condition called Ectodermal Dysplasia.’
Those words changed our lives forever.
Written by victoriamcculloch, published 16 days ago. 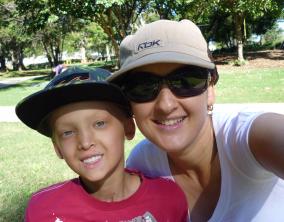 Owen was born in 2004. He was a quiet, beautiful baby; perfect in every way. He was 3 weeks early and went into the special care nursery because he had a slight temperature. He stayed the required 72 hours with negative tests. The hospital policy at the time required that we re-attend to see the paediatrician for a review. The paediatrician was lovely and noticed something about Owen straight away, but unfortunately she didn’t know about ED. She asked us to start looking at our family history and send Owen for testing for any known conditions. Everything came back negative. He was thriving, if a little on the small side of the scales.
Thoughts of anything being wrong left my mind completely.
Owen wasn’t a sickly child. He went to day care and picked up the usual colds. We did notice that he didn’t get runny noses and when the discharge was released from his nose, it was different to other children. At 12 months he had his adenoids out and the ENT recommended a nasal toilet due to the blockages and general crusty state of his nasal passages.
ED was never mentioned.
When Owen was 18 months old, he was still toothless. I became concerned (after prompting from my mum) and thought it would be a good idea to have this checked out by a dentist. After a disastrous appointment at our local dentist (Owen was very difficult to x-ray due to his age), we were sent to see a specialist.
The specialist dentist we saw was absolutely lovely and very gentle. He asked strange questions about Owen like, “Does Owen sweat?” I was very confused because I was there to talk about his teeth. I couldn’t remember Owen ever sweating. My mind raced with thoughts like, “Do babies sweat?” “Of course they sweat.” “I haven’t seen Owen sweat.” “I should have noticed that!”
I felt like a terrible mother.
I walked out of that appointment a complete mess. All I could think was that Owen wasn’t going to get any teeth. I wasn’t sure what that would mean for him in the future. I hadn’t yet started to think about Ectodermal Dysplasia because I had no idea what it was.
The specialist provided us with a referral to the Royal Children’s Dental Department in Brisbane.
On returning home, I typed ‘Ectodermal Dysplasia’ into Google and started to read about the condition. A number of photos made me think that Owen did have the condition. There were children that looked like they could be his brother or sister. I read about a lady from America who travelled to Sydney and was talking about how she had survived a hot country. Since we’re from further North (and therefore hotter), this made me more aware of the behaviour Owen had developed to help himself cool down. He would constantly lay on the tiles and we had previously thought this was because he didn’t want to walk. I also thought back to his birth and realised his temperature may have only been high due to the heat lights he was placed under when he was first born.
My mother-in-law found ozED on the internet and passed on their details to me. She had already contacted the President at the time (Andrew Williams). I was still processing everything that was going on and was reluctant to ring and discuss this with anyone, especially with a complete stranger.
After we went to the genetic counselling at the Royal Children’s Hospital, I had lots of questions. I decided to make the call. When I rang the ozED number Natalie Williams answered. I will be forever grateful to her for listening, letting me cry, and giving me the information I needed at the time.
This was the start of our journey with ED and ozED. It has been a roller coaster ride, but the support, friendship and sense of extended family that we have found has changed our lives for the better.
Written by victoriamcculloch, published 16 days ago.