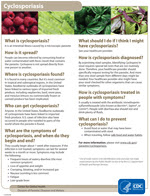 Progression of the Outbreak Investigation

As of August 26, 2014 (5pm EDT), a total of 304 ill persons with confirmedCyclospora infection were reported to CDC in 2014. Of these, 207 occurred in persons who did not travel outside the country in the 2 weeks before onset of illness. Cases were reported from the following states: Arkansas, California, Connecticut, Florida, Illinois, Maryland, Maine, Massachusetts, Michigan, Minnesota, Montana, Nebraska, Pennsylvania, New Jersey, New York (including New York City), Texas, Virginia, Wisconsin, and Washington. Most (133; 64%) cases were reported to CDC in July, and the majority (133; 64%) of the cases were reported from Texas; among Texas cases, 70% were reported in July. Most (176; 85%) illness onset dates occurred in June and July.
Among 204 ill persons for whom information is available, age ranged from 3 to 88 years, with a median age of 49 years; 115 (56%) of ill persons are female. Among 183 ill persons for whom information is available, 7 (4%) have reported being hospitalized. No deaths have been reported.
More information about Cyclospora can be found on CDC’s Cyclospora pages.

To date, at least 133 ill persons with Cyclospora infection have been reportedamong Texas residents

who did not travel outside of the country within the 2 weeks before becoming ill, the majority (126; 95%) of which occurred after May 1.  Most illness occurred in June and July. Reported cases of cyclosporiasis in Texas have returned to baseline levels in August; therefore, it is likely that the outbreak has ended.
Epidemiologic and traceback investigations conducted by state and local public health and regulatory officials in Texas and the FDA indicate that some illnesses among Texas residents were linked to fresh cilantro from Puebla, Mexico.
During interviews with ill persons in Texas, 57% reported having eaten fresh cilantro 2–14 days before they became ill. This proportion is significantly higher than results from a previously conducted survey of healthy persons

in the neighboring state of New Mexico where 24% reported eating fresh cilantro in the 7 days before they were interviewed.
Investigating "clusters of illnesses" can provide critical clues about the source of an outbreak. A cluster of illnesses is defined as more than one unrelated ill person (i.e., they do not know or live with each other) who report eating at the same restaurant location, attending a common event, or shopping at the same location of a grocery store before becoming ill. If several unrelated ill persons ate or shopped at the same location of a restaurant or store within several days of each other, it suggests that the contaminated food item was served or sold there. In addition, traceback of suspected food items to identify a common point of contamination may be facilitated by records kept at these locations. Investigators identified six clusters of illnesses in Texas. The clusters identified in Texas involved 2 to 15 ill persons.
Epidemiologic and traceback investigations have been conducted at four restaurants in Texas, where multiple unrelated ill persons reported having eaten. A total of 21 ill persons were associated with these restaurant clusters. The number of ill persons at each restaurant range from 2 to 12 persons. All (100%) of ill persons in these four clusters reported consuming a food item from the restaurant containing fresh cilantro in the 2–14 days before they became ill. Preliminary traceback information indicates that Puebla, Mexico, was a source of the cilantro that was served at all four restaurants. Puebla, Mexico, was also identified as a source for fresh cilantro for an outbreak of cyclosporiasis in Texas during the summer of 2013.
On August 28, 2014, FDA announced

that it had increased sampling of cilantro at the U.S./Mexico border.

On August 28, 2014, FDA announced that it had increased sampling of cilantro at the U.S./Mexico border.
CDC and state and local public health partners are continuing surveillance to identify and interview additional ill persons to identify sources of infection.
Investigations are ongoing in other states. To date, there is no evidence to suggest that any illnesses outside of Texas are linked to cilantro from Puebla, Mexico.
CDC and other institutions are working to develop advanced molecular detection (AMD) methods for Cyclospora cayetanensis that could distinguish among strains of this parasite. In the future, DNA fingerprinting methods could help public health investigators determine whether cases of cyclosporiasis are linked to each other and to particular food items/sources. Learn more about AMD.
Publicado por salud equitativa en 6:59