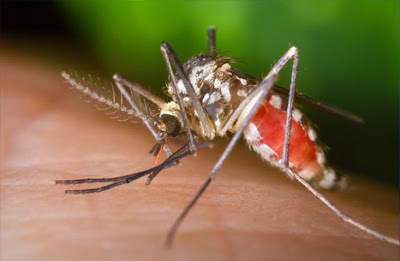 Most bunyaviruses are transmitted by mosquitoes, ticks, or sand flies. The Ochlerotatus triseriatus mosquito pictured here carries a type of bunyavirus that is associated with pediatric encephalitis in the United States.
Bunyaviridae is a large and diverse family of viruses. Most are transmitted by mosquitoes, ticks, and sand flies. Bunyaviruses that are known to cause human disease include the viruses that cause Rift Valley fever, Crimean-Congo hemorrhagic fever , andhantavirus pulmonary syndrome . Recently, newly described bunyaviruses have emerged as causes of severe human illnesses in China, the United States and other countries.
Scientists know very little about most bunyaviruses. They believe that the public health impact of these viruses has been grossly underestimated because of this lack of knowledge. To address this, CDC has generated gene sequence data and improved detection methods for 47 bunyaviruses. Nonetheless, most bunyaviruses remain poorly described and undetectable at this time.
To help solve this problem, CDC is using genomic sequencing to analyze its bunyavirus specimens. CDC scientists will use these data to create new tests to diagnose bunyavirus infections. This will help researchers worldwide to improve their ability to detect these viruses and determine more precisely the impact of bunyaviruses on public health.