20 Years After BRCA: What We’ve Learned About Genetics and Breast Cancer - Insight

20 Years After BRCA: What We’ve Learned About Genetics and Breast Cancer - Insight

20 Years After BRCA: What We’ve Learned About Genetics and Breast Cancer


Twenty years ago, scientists announced the discovery of BRCA1, which arguably has become the best-known cancer susceptibility gene in the world. When inherited in a mutated form, the gene sharply increases a woman’s chances of developing breast or ovarian cancer, often at an early age. The discovery has changed the way women with a family history of breast and ovarian cancer approach these diseases, helping them better understand their risk and the options for reducing it. It also presents them with complex choices about sharing genetic test results with family members who may also carry the mutated gene.
The hunt for BRCA1 began in earnest in 1990, after Mary-Claire King of the University of California at Berkeley discovered a genetic link to breast and ovarian cancer on chromosome 17. That set in motion a worldwide competition to scour chromosome 17 for the actual gene – dubbed BRCA1 for BReast CAncer 1. In August 1994, Mark Skolnick, PhD, of Myriad Genetics in Salt Lake City, announced his group had found BRCA1 and mapped its DNA sequence. 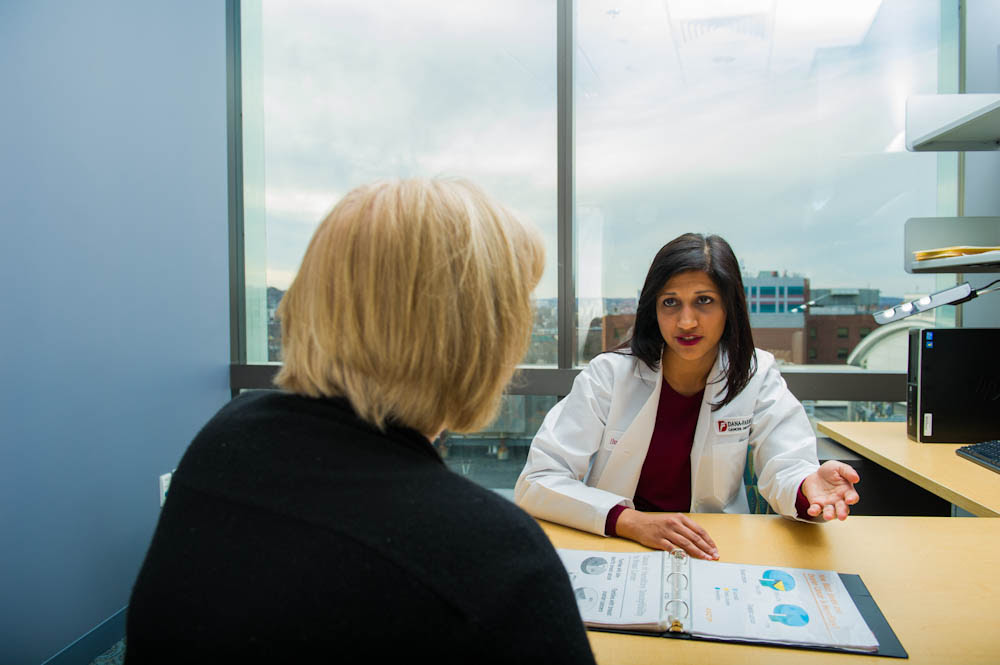 Huma Q. Rana, MD, clinical director for Dana-Farber’s Center for Cancer Genetics and Prevention.
While these discoveries led to the identification of BRCA1 – and, a year later, to a second breast cancersusceptibility gene, BRCA2 – their roots lay in research begun decades earlier by Dana-Farber’s Frederick P. Li, MD. With his colleague Joseph Fraumeni, MD, Li found that abnormalities in certain inherited genes explained why some families have a pattern of cancer across the generations.
Although only about 5-10 percent of women with breast cancer carry inherited mutations in BRCA1 or 2, those who dohave these harmful mutations face a substantially elevated chance of developing a second breast cancer or ovarian cancer. About 12 percent of women in the general population will develop breast cancer at some point during their lives, research shows. By contrast, 55-65 percent of women who inherit a harmful BRCA1 mutation and about 45 percent who inherit a harmful BRCA2 mutation will develop breast cancer by age 70.
The picture is similar for ovarian cancer. About 1-2 percent of women in the general population develop ovarian cancer. Compatively, 39 percent of women who inherit a BRCA1 mutation and 10-20 percent who inherit a BRCA2 mutation will develop ovarian cancer by age 70.
Read more:
The Truth About BRCA Testing and Genetic Risk
Infographics: Breast Cancer and Genetics
Outsmart Your Genes: Understanding BRCA 1/2 Cancer Risk
Five Things Young Women with Breast Cancer Should Know
The discovery of BRCA1 and BRCA2 has removed some of the unknowns about breast and ovarian cancer risk and clarified the choices available to women and men who test positive for harmful mutations in these genes. Those choices include more frequent breast exams; enhanced and early breast imaging/screening; surgery to remove the breasts as well as the ovaries; and medications such as tamoxifen, which, according to several studies, can lower the risk of breast cancer in BRCA1 and 2 mutation carriers.
In the years since the discovery of BRCA1 and 2, research has identified the role these genes normally play in cells, and how mutations disrupt that role, potentially leading to cancer. Researchers led by Dana-Farber’s David Livingston, MD, for example, have shown BRCA1 and 2 to be “tumor-suppressor” genes that help repair damaged DNA within cells. When a mutation interferes with such repairs, the accumulation of DNA damage can send cells on a course to cancer.
Research into the basic workings of BRCA1 and 2 has led to some promising approaches to treating breast and ovarian cancers. Recent studies by investigators at the Susan F. Smith Center for Women’s Cancers at Dana-Farber have shown that chemotherapy agents with platinum, combined with drugs known as PARP inhibitors, are effective at treating BRCA1 and 2-related breast cancer.
Testing positive for BRCA1 or 2 mutations can raise concerns not only about one’s own health but also that of relatives who may also have inherited the mutations. Many cancer centers providegenetic counseling services to help people work through questions about how – or whether – to talk with loved ones about testing.
You might also like
Publicado por salud equitativa en 3:07