October 15 is National Latino AIDS Awareness Day, a day to raise awareness of HIV and AIDS prevention among Hispanics/Latinos living in the United States and its territories.
Coordinated by the Latino Commission on AIDS, this day encourages Hispanic/Latino1 communities to take action by promoting and mobilizing HIV and AIDS awareness activities. This year's theme, To End AIDS, Commit to Act/Para Acabar con el SIDA, Comprométete a Actuar, invites everyone to make a commitment to know the facts about HIV, get tested for HIV, and get into and stay in medical care if they have HIV.

HIV and AIDS affect all communities and anyone can be affected by HIV regardless of age, gender, sexual orientation, or marital status. More than 1.1 million people are living with HIV in the United States and about 50,000 people become infected each year. Hispanics/Latinos, one of the groups most heavily impacted, account for 21% of these new HIV infections, and an estimated 1 in 36 Hispanic/Latino men and 1 in 106 Hispanic/Latina will be diagnosed with HIV in their lifetime. 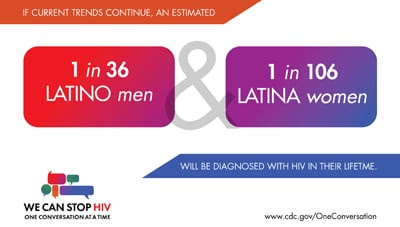 An estimated 1 in 36 Hispanic/Latino men and 1 in 106 Hispanic/Latina will be diagnosed with HIV in their lifetime
Hispanics/Latinos account for only 16 percent of the U.S. population, but 19% of people living with HIV and 21% of new HIV infections each year. In addition:
A number of challenges contribute to this burden of HIV in Hispanic/Latino communities, including limited access to health care, language or cultural barriers in health care settings, stigma, discrimination, and in some cases, poverty and injection drug use. Learn more about the impact of HIV among Hispanics/Latinos.[344 KB]
There are encouraging signs of progress against HIV in the Hispanic/Latino community. New CDC data estimate that Hispanics/Latinos have higher percentages of linkage to and retention in medical care, as well as prescriptions for HIV medicines (antiretroviral therapy, or ART) when compared to the national population of persons with HIV. However, a lower percentage has achieved viral suppression (having low levels of the HIV virus in the blood), which is the best way for people with HIV to stay healthy and reduce their risk of transmitting the virus to others. HIV medicines are recommended for all people living with HIV, regardless of how long they've had the virus or how healthy they are. A new CDC HIV awareness campaign, HIV Treatment Works, encourages people living with HIV to Get in Care, Stay in Care and Live Well.

We can stop HIV one conversation at a time…

It may not always be easy to talk about HIV and AIDS but talking openly about HIV will help to protect the health of every member of the community. Learning the facts about HIV and talking about ways to protect oneself can help increase HIV awareness, decrease the stigma and shame that are too often associated with HIV, and play a part in stopping HIV in the Hispanic/Latino community.
Everyone has a role to play.
Open dialogue about ways to protect yourself and your loved ones can help reduce cultural barriers and stigmas surrounding HIV. This is the goal of CDC'sAct Against AIDS newest campaign. We Can Stop HIV One Conversation at a Time/Podemos Detener el VIH Una Conversación a la Vez is CDC's first communication campaign specifically developed to increase HIV and AIDS awareness among the general Hispanic/Latino community and decrease HIV-associated stigma and shame, which may prevent people from talking about HIV and AIDS.

To help start these critical conversations, the campaign website provides facts and practical tools and tips to help families and friends begin or continue conversations about HIV prevention, awareness, testing, and treatment.

How can you protect yourself?

Today, more tools than ever are available to prevent HIV. In addition to limiting your number of sexual partners, never sharing needles, and using condoms correctly and consistently, you may be able to take advantage of newer biomedical options such as pre-exposure and post-exposure prophylaxis.
1Hispanics/Latinos can be of any race.