Living with CMTC in Greece

Our son was born on a sunny morning in May. We were unpleasantly surprised that his thin left leg was completely covered with dark purple spots.
Written by RareConnect team, published 3 months ago. 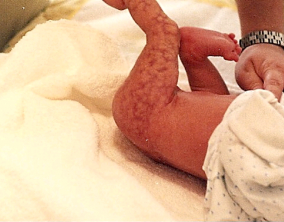 Luckily the baby was, in any other respect, healthy. In the beginning we were concerned about the situation with his small leg, and we wanted a diagnosis.
After several medical examinations in several different hospitals and several doctors we still did not manage to receive a realistic diagnosis of CMTC. No doctor could give us a diagnosis at all.
In the meantime our son grew up and he walked when he was 11 months (which was an enormous relief for us) and he developed furthermore without any problems.
His leg started to look better and better, but the most worrying was the fact that there was a difference in length between the left and the right leg.
So for a period of 6 or 7 years we had no idea what exactly was going on, or what to expect in the future.
During these years, in spite of all those examinations and doctor’s opinions, I searched the internet for information about this illness. Since I had no official name, I did find some comparable illnesses, which sometimes were very scary, but they were never exactly the symptoms our son showed.
Echo’s pointed out that the blood flow was good and we were offered a laser treatment for the skin. About 2,5 years ago, when I was searching through a website from an American hospital treating birth marks, I found an article on CMTC.
After 1 to 2 hours searching and reading on the site of Lex, I was pretty convinced I had finally found what I was searching for …
All symptoms and photo’s were exactly what our son was showing.
Even than the doctors stayed very careful since they never heard anything about this rare disease. So we decided to ask Lex for a special medical examination from a specialist and Lex referred us to Dr. van Steensel in Maastricht.
In October 2008 we flew to the Netherlands and finally we received our first real diagnosis and advice as well as a perspective what to expect in the near future.
My wife and I have lots to thank Lex and Dr. van Steensel for, for all their help and advise concerning CMTC.
Our son is a smart and talented young boy, he is doing well in school and until today he has no problem exercising martial arts.
We are a little concerned though about the psychological effects of what his leg looks like, especially during puberty, but now we are very optimistic about the future. “