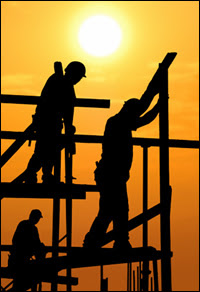 When workers are exposed to heat or hot environments, employers should implement heat illness prevention programs.

Sheila Arbury, MPH1, Brenda Jacklitsch, MS2, Opeyemi Farquah3, Michael Hodgson, MD4, Glenn Lamson, MS5, Heather Martin, MSPH3, Audrey Profitt, MPH6(Author affiliations at end of text)
Exposure to heat and hot environments puts workers at risk for heat stress, which can result in heat illnesses and death. This report describes findings from a review of 2012‒2013 Occupational Safety and Health Administration (OSHA) federal enforcement cases (i.e., inspections) resulting in citations under paragraph 5(a)(1), the "general duty clause" of the Occupational Safety and Health Act of 1970. That clause requires that each employer "furnish to each of his employees employment and a place of employment which are free from recognized hazards that are causing or are likely to cause death or serious physical harm to his employees" (1). Because OSHA has not issued a heat standard, it must use 5(a)(1) citations in cases of heat illness or death to enforce employers' obligations to provide a safe and healthy workplace. During the 2-year period reviewed, 20 cases of heat illness or death were cited for federal enforcement under paragraph 5(a)(1) among 18 private employers and two federal agencies. In 13 cases, a worker died from heat exposure, and in seven cases, two or more employees experienced symptoms of heat illness. Most of the affected employees worked outdoors, and all performed heavy or moderate work, as defined by the American Conference of Governmental Industrial Hygienists (2). Nine of the deaths occurred in the first 3 days of working on the job, four of them occurring on the worker's first day. Heat illness prevention programs at these workplaces were found to be incomplete or absent, and no provision was made for the acclimatization of new workers. Acclimatization is the result of beneficial physiologic adaptations (e.g., increased sweating efficiency and stabilization of circulation) that occur after gradually increased exposure to heat or a hot environment (3). Whenever a potential exists for workers to be exposed to heat or hot environments, employers should implement heat illness prevention programs (including acclimatization requirements) at their workplaces.
To understand the effectiveness of existing heat illness prevention campaigns and tools, OSHA convened the Heat Illness Workgroup* to conduct a systematic review of cases of occupational heat illness or death cited for federal enforcement under paragraph 5(a)(1) during 2012–2013. Cases were identified by OSHA's Directorate of Enforcement Programs. For all cases reviewed, the workgroup established a list of program elements it considered important based on published literature and members' professional experience (Table). These included information on local weather conditions, work processes and workload, employer heat illness prevention program elements, health outcomes, numbers of persons affected, and individual risk factors. When needed, OSHA Compliance Safety and Health Officers were consulted for case clarification.
During 2012‒2013, a total of 20 cases were cited for federal enforcement under paragraph 5(a)(1). Thirteen cases involved a worker death attributed to heat exposure, and seven involved two or more workers with symptoms of heat illness. Thirteen worksites were outdoors. In eight cases, workers performed heavy work, and in 12 cases they performed moderate work per American Conference of Governmental Industrial Hygienists workload definitions (2). Seven cases occurred in indoor facilities with a local heat source, such as laundry equipment or combustion engines. The cases occurred in various workplaces, including two in solid waste collection, two in mail delivery, nine in outdoor worksites (e.g., ship repair, landscaping, roofing, and oil servicing), two in laundries, and five in indoor worksites with machinery or other heat sources. All heat illnesses and deaths occurred on days with a heat index in the range of 84.0°F–105.7°F (29.0°C–41.0°C), although those working in direct sunlight might have experienced a heat index that was up to 15.0°F (8.3°C) higher than reported (3).
Thirteen employers had not incorporated an approach to identifying heat illness risk (e.g., heat index), as described by the National Oceanic and Atmospheric Administration, into their heat illness prevention program (4). None of the employer heat illness prevention programs were complete. Twelve had no program at all, seven provided inadequate water management, and 13 failed to provide shaded rest areas. Only one of the employers used work-rest cycles (i.e., scheduled periods of rest between periods of work based on temperature, humidity, and the intensity of the work activity), and none had an acclimatization program (Table). Four of the 13 deaths occurred on the first day at work in a new job or after returning from time away from the job, three on the second day, and two on the third day; four deaths occurred among long-time employees. In the cases that involved heat illness but not a death, the number of days on the job did not appear to contribute to any of the heat-related incidents.

Heat-related deaths often occur in occupations in which workers are performing tasks in hot environments, causing them to build metabolic heat faster than their bodies can release heat and cool down. In North Carolina, during 2008–2010, work-related heat illnesses resulting in emergency department visits were more common than work-related emergency department visits with any other cause among persons aged 19–45 years (5). In Maricopa County, Arizona, during 2002–2009, outdoor work in construction and agriculture accounted for 35% of heat-related deaths in men (6). A total of 68 crop production worker deaths were reported in the United States during 1992–2006, resulting in an annual average death rate of 0.39 deaths per 100,000 crop workers (7). Particularly in agriculture, estimates of heat illness cases are likely to be undercounts because some surveys exclude workers on small farms (8).
Although OSHA's Heat Illness Prevention Campaign's core message "Water. Rest. Shade." has been widely disseminated and reflects many similar public health messages (9), this review shows that some employers have not developed complete heat illness prevention programs. Strikingly, in the cases reviewed, the failure to support acclimatization appears to be the most common deficiency and the factor most clearly associated with death. Employers need to provide time to acclimatize for workers absent from the job for more than a few days, new employees, and those working outdoors during an extreme heat event or heat wave. Employers must ensure that all workers acclimatize to hot environments by gradually increasing duration of work in the hot environment. In addition, health care providers should be aware of the loss of acclimatization in their patients who have been out of work for a week or more and counsel them that they will need time to regain acclimatization once they return to their job. New workers and all workers returning from an absence of more than a week should begin with 20% of the usual duration of work in the hot environment on the first day, increasing incrementally by no more than 20% each subsequent day (3). During a rapid change leading to excessively hot weather or conditions such as a heat wave, even experienced workers should begin on the first day of work in excessive heat with 50% of the usual duration of work, 60% on the second day, 80% on the third, and 100% on the fourth day (9). Full acclimatization might take up to 14 days or longer to attain, depending on individual or environmental factors.
Employers should be aware of the importance of all elements, including acclimatization, in their heat illness prevention programs. They should be diligent about 1) designating a person to develop, implement, and manage the program, 2) monitoring the temperature (e.g., heat index and wet bulb globe temperature†) of their worksite, 3) providing water and rest breaks in a shaded, cool area, 4) acclimatizing workers by gradually increasing the exposure to heat or a hot environment, 5) modifying work schedules as necessary to reduce workers' exposure to heat, 6) training workers on the signs and symptoms of heat illness, 7) monitoring workers for signs of heat stress, and 8) planning for emergencies and response. Guidance provided by CDC's National Institute for Occupational Safety and Health includes information on acclimatization, work-rest schedules, adequate hydration, indices for monitoring environmental heat stress (including wet bulb globe temperature), and other recommendations that can be used for developing a heat illness prevention program (9,10).
The findings in this report are subject to at least three limitations. First, information collected retrospectively might fail to identify important elements such as individual prior acclimatization that might have been missed by OSHA Compliance Safety and Health Officers. Second, information from weather websites regarding past weather conditions relatively close to the worksite under consideration might not accurately represent conditions at the worksite itself (especially because at least one of the weather stations was more than 100 miles from the worksite) and thus might fail to identify the actual impact of weather. Finally, OSHA Compliance Safety and Health Officers performing workplace inspections might have missed program elements identified by the Heat Illness Workgroup because these elements were not part of routine information collection.
Additional information and resources regarding heat stress are available from CDC at http://www.cdc.gov/niosh/topics/heatstress and from OSHA athttps://www.osha.gov/SLTC/heatillness/edresources.html


* The Heat Illness Workgroup was created in 2014 after an informal internal review of OSHA's Heat Illness Campaign and consisted of representatives from the various offices (all listed as coauthors in this report) involved in campaign materials development. The group invited a representative from CDC's National Institute for Occupational Safety and Health when they became aware of the CDC/NIOSH document revision, Criteria for a Recommended Standard: Occupational Exposure to Heat and Hot Environments that was underway.
† Wet bulb globe temperature is the measure of heat stress in direct sunlight that takes into account temperature, humidity, wind speed, sun angle, and cloud cover. This differs from the heat index, which takes into account temperature and humidity and is calculated for shady areas. Additional information available athttp://www.srh.noaa.gov/tsa/?n=wbgt