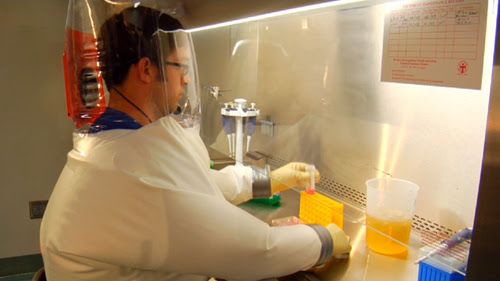 Caption: Researcher inside a biosafety level 4 laboratory, which provides the necessary precautions for working with the Ebola virus.
Credit: National Institute of Allergy and Infectious Diseases, NIH
As the outbreak of Ebola Virus Disease continues to spread in West Africa, now affecting four countries in the region, I am reminded how fragile life is—and how important the role of the National Institutes of Health (NIH) is in protecting it.
NIH research has helped us understand how Ebola initially infects people and how it spreads from person to person. Preventing this spread is currently our greatest defense in fighting it. Through research, we know that the Ebola virus is transmitted through direct contact with bodily fluids and is not transmitted through the air like the flu. We also know the symptoms of Ebola and the period during which they can appear. This knowledge has informed how we manage the disease. We know that the virus can be contained and eradicated with early identification, isolation, strict infection control, and meticulous medical care.
Research also is helping to develop new strategies against Ebola Virus Disease. Scientists employed and funded by NIH’s National Institute of Allergy and Infectious Diseases (NIAID) have been working for decades to develop tests to diagnose the virus early, therapies to treat illness caused by the virus, and vaccines to prevent infection. Several experimental products are in early development and showing promise in laboratory models—a necessary step before testing in humans.
Because of the current situation in Africa, NIAID’s Vaccine Research Center has accelerated an early-stage clinical trial to test the safety of a candidate Ebola vaccine in humans. The trial will start enrolling patients next month. If the vaccine is found to be safe, the trial will move to the next phase to test whether the vaccine produces protective antibodies to fight the virus. This testing could begin as early as January. Optimistically, the vaccine could be available about a year after that for people at highest risk for exposure to Ebola, such as health care workers.
In addition to prevention, research is finding ways to treat the disease. NIH has been supporting the development of a number of promising treatments, including preclinical work on a monoclonal antibody combination that has showed benefit in a monkey model of the disease. A monoclonal antibody is a molecule produced in a lab and engineered to stimulate the immune system to attack an invader, such as a virus or cancer.
You may have seen news reports that two Americans who contracted the virus in Africa and were transported to Emory University Hospital received such a monoclonal antibody treatment as an emergency step, without any certainty whether or not this has helped their recovery. The manufacturer of this experimental treatment continues to research and evaluate the product’s safety and effectiveness. The treatment will have to complete clinical trials to test safety and effectiveness in humans. Even if the Food and Drug Administration authorized the monoclonal antibody product for emergency use, there currently are only a few courses of the treatment available. The product is actually made in tobacco plants, and scale up is a slow and complex process. The product is just one of several supported by NIAID that are showing promise in preclinical testing and are being reviewed for possible scale up and emergency use in West Africa.
At this time, however, the most effective way to stop the current Ebola outbreak in West Africa is meticulous work in finding Ebola cases, isolating and caring for those patients, and tracing contacts to stop the chain of transmission. It requires educating people about safe burial practices and having health care workers strictly follow infection control in hospitals. This is how all previous Ebola outbreaks have been stopped.
We are fortunate to live in a country that places such a high value on biomedical research and public health systems. Through this investment, we protect the health of Americans and people around the world. It is during these times of tragedy that my faith in the U.S. biomedical research enterprise and public health system is especially strong. Together with the leadership of the affected countries in West Africa, the World Health Organization, dedicated medical aid organizations like Doctors Without Borders, and the remarkable efforts of our colleagues at the Centers for Disease Control and Prevention who are ably leading the current U.S. response, we will ultimately contain this outbreak and prevent future ones.
Links:
Understanding Ebola and Marburg hemorrhagic fevers (NIAID)
Tracking a Deadly Virus, NIH Director’s Blog, November 14, 2012
CDC: Stopping the Ebola Outbreak