Approximately 25 to 30 million Americans suffer from rare diseases. The National Institutes of Health's Undiagnosed Diseases Network is hoping to decrease that number. One woman who knows the angst of trying to find a diagnosis for her two children has shared her experience in the program.
When the lights finally came back on after Hurricane Sandy devastated the East Coast, Samantha Anastasia was ecstatic, but it wasn't just because she and her New Jersey neighbors were finally out of the dark. After 20 years of searching for a diagnosis for two of her three children, she had just returned from the National Institutes of Health's (NIH) Undiagnosed Diseases Program (UDP) in Bethesda, Md. It was there that she finally learned what had caused two of her children to lose their ability to speak and walk when they were just infants.
The NIH and the NIH’s Common Fund recently announced that UDP, a pilot program launched in 2008, has been expanded to become the Undiagnosed Diseases Network (UDN). The clinical sites will conduct scientific investigation in cases that involve patients with chronic, undiagnosed conditions.
In addition to the Coordinating Center at Harvard Medical School in Boston, there are seven clinical sites: the NIH headquarters in Bethesda, Harvard Teaching Hospitals, Duke University, Vanderbilt University Medical Center, Baylor College of Medicine, the University of California Los Angeles, and Stanford Medicine. 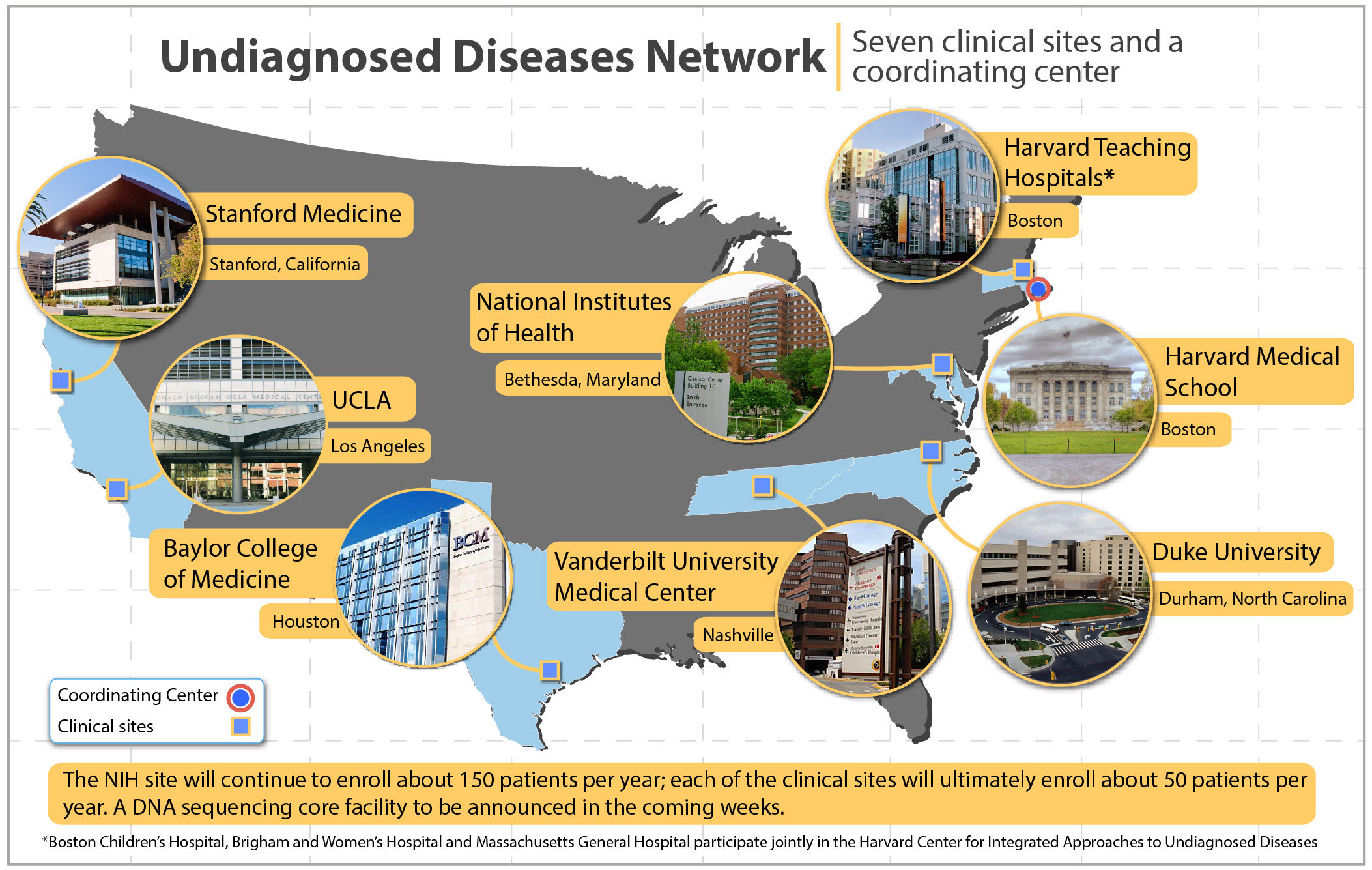 Speaking to Healthline, Anastasia Wise, Ph.D., program director of the Division of Genomic Medicine at the National Human Genome Research Institute (NHGRI), said, “The goal is that this network will be able to both extend where patients can be seen across the U.S., as well as promote using genomic data in disease diagnosis and bring together clinical and lab researchers to be able to help elucidate what underlies these different rare diseases, and better come up with methods to be able to make diagnoses in these undiagnosed patients.”
According to Wise, approximately 25 to 30 million Americans, or eight to 10 percent of the population, are coping with the effects of a rare disease.

Anastasia, the mother of Amanda, age 21, Daniel, 15, and Nick, 18, who is fortunately unaffected, sat down with Healthline to tell us her harrowing story.
Noting that Amanda progressed normally for the first ten months of her life, Anastasia said, “She stopped reaching those milestones. She was sitting and playing with toys a little bit, babbling, drinking a bottle, and finger feeding herself. She never did crawl or walk. She could roll and pull to stand. But then all of that stopped. Over the course of a month she lost those skills. It started with a lumpy posture and she began falling over.”
Despite visiting many different doctors over many years, including those from large academic hospitals in New York City, Anastasia said, “No one could tell us what it was. They could tell us a million things it was not. Amanda plateaued and didn't have any motor function. She could move, but it wasn't functional movement. It was uncontrolled. It wasn't enough for her to complete a task. She seemed happy. I could tell that she was bright and that she could understand me as much as a baby could. I could clearly see in her eyes that she was communicating.”
Before Amanda turned three, Anastasia had a son, Nick, who thankfully, does not have the condition. At this time, Anastasia focused on Amanda’s schooling in preschool programs for the handicapped. “I was working on different means of communication, and realized her most controlled movement was with her head. We were going with head switches. It was laborious to communicate that way, but it was all we had,” said Anastasia.
When Anastasia gave birth to her third child, Daniel, he progressed normally until he reached nine months old, when she started to see some regression. “We caught it early on. They admitted him to the hospital and gave him high doses of steroids, and ran all kinds of tests. Technology had advanced. I was very hopeful that we would figure it out because we were catching it while it was happening. With Amanda, by the time we got to these top doctors her regression was done. She had plateaued. Daniel was right in the middle of it when we started looking for things, but to no avail. They said neurology doesn't have anything to offer now. We have your kids on our radar. Come back every year, then every two years.”
Find Local Clinical Trials Here »

A Fight to the Finish

It was when Anastasia’s father saw a news program featuring Dr. William Gahl from the NIH’s UDP, that the family’s dream of finding a diagnosis began to gain momentum. At the time, a physician in New York was doing tests on the children.
“I told my father, if the physician comes up empty-handed I’ll look into the UDP. When the doctor came up empty-handed, I told her about the UDP. She had never heard of it. I said, ‘I need a referral from a doctor and medical records.’ She had a hard time with that at first, saying, ‘What do you think they could do for you that I can’t?’ I said, ‘please,’ so she looked into the program and said, ‘I’ll write the letter.’”
Six weeks after sending the required information to the UDP, Anastasia received a call that Amanda and Daniel had been accepted into the program. “It was like winning the lottery. For someone to research my kids...I felt they’d have to find something. It’s very confusing and genetics is so complex.” 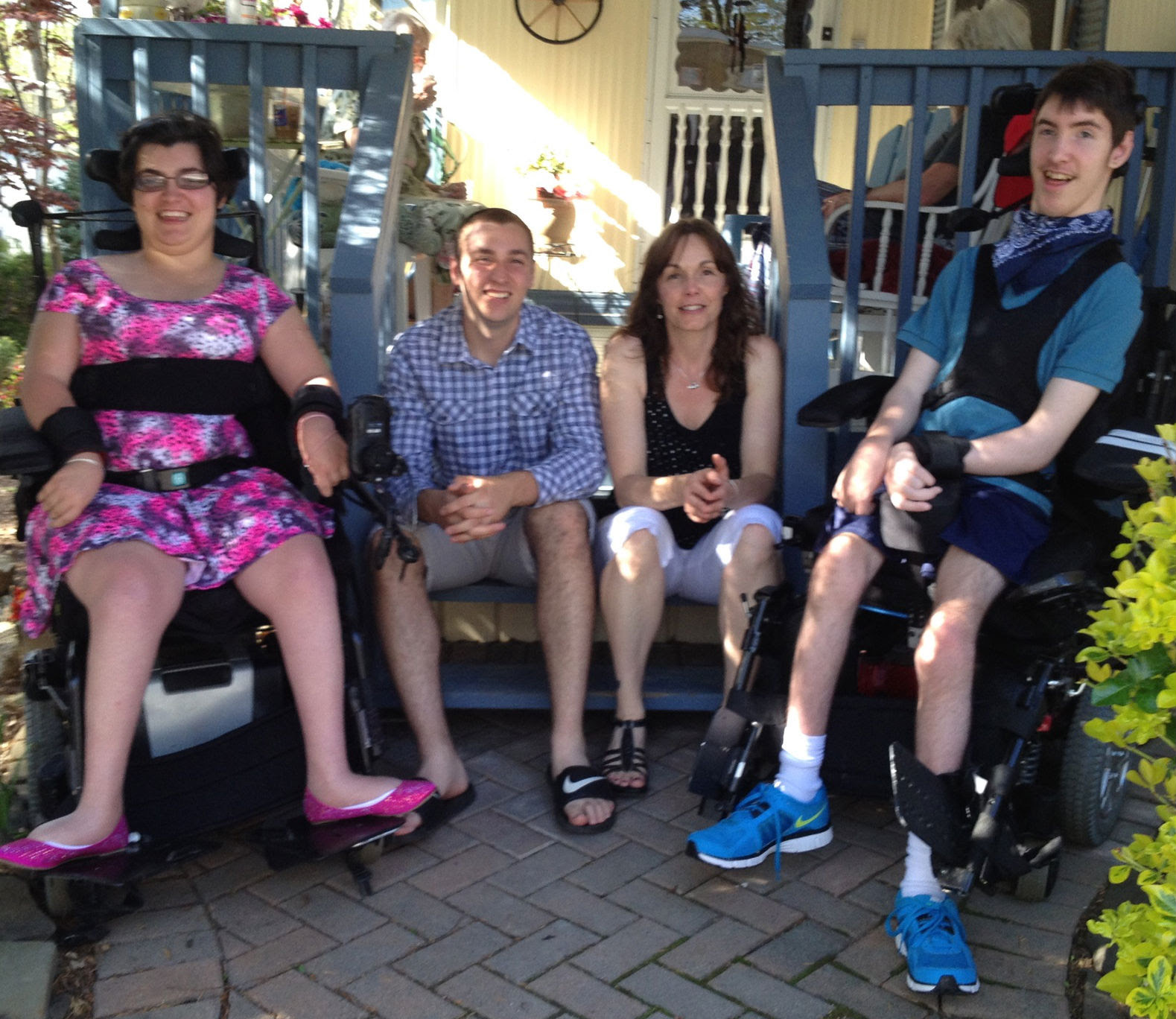 The Anastasia family
The family packed their bags and headed to the NIH in December 2011 for one week, Anastasia said. “Dr. Toro, our researcher, is our hero. We were busy from Monday through Friday from 8 am to 6 pm. We saw neurologists, physical therapists, speech therapists, podiatrists, and genetic ophthalmologists. They did MRIs, spinal taps; took muscle, skin, urine, and blood; and they X-rayed every bone in their body. They also took blood and urine from me, their father, and my other son,” she said.
Before the family went home, Gahl told them he was confident that someday they would be able to offer a diagnosis. That day came the following September, when the family was called back to the NIH to discuss the findings.
“They wouldn't tell me if they found something. They couldn't say anything over the phone. If you thought I was excited about getting accepted, this was wow," Anastasia said. "It was a week and a half after Hurricane Sandy. It was such a good time to have something positive happen. It really put things in perspective for me. Sandy was surreal, but here’s something I was searching for, for almost 20 years, and I was going to get the news of my life. Good, bad, or indifferent, I thought I was ready; and the kids were excited to go to a place where there was electricity.”
Related News: Drug Research for Orphan Diseases »

The Diagnosis They Had All Been Waiting for

It was in the boardroom of the hospital that the Anastasia family found out their children had Aicardi-Goutieres 2B. “We were told: there are several mutations of this gene, and your children have 2B. My husband and I are carriers. With this syndrome, if you have one good copy of this gene, you’ll function fine. But if you have two bad copies, you have Aicardi-Goutieres 2B. My husband and I each had a good copy and a bad copy, and when Amanda and Daniel were conceived we passed our bad copies to them.”
There are just 450 cases of Aicardi-Goutieres (AG) worldwide, and Anastasia said, “I had never met anybody with two kids with something as severe as my kids. When they told me what they had, and there were other families, some like mine, some with three kids affected, and worldwide, I was overwhelmed with emotion. I just started to cry. I wasn't happy or sad; it was just relief.”
She eagerly spread the news to her friends and relatives. “At a really desperate time it gave people hope, because people knew us for years and we didn’t know what this was," Anastasia said. "Even if we didn't have power for another week, I was on cloud nine — I have a diagnosis. I don’t think we ever would have found out if we didn't have someone looking at their genetic makeup. I’m very grateful for the program.”
Despite the fact that there is no treatment for AG, Anastasia says she is at peace, and offers words of hope to other families who may be going through what she has: “Hang on. Have hope. For almost two decades we didn’t know. At some point along the way, I said I may never know, so my focus was really just educate and teach them and let them be happy, and just give them what you could give them.”
It’s apparent from what her kids are doing today that Anastasia has given her children so much. Daniel, who will soon enter high school, is busy writing action adventure stories. “It’s a work in progress for him, but he’s very creative, and he has come such a long way,” said Anastasia.
Amanda just finished school, went to the prom, and like most young adults, is very much plugged into Facebook. She works at a day care nursery school, programming her computer to speak out instructions for kids to do arts and crafts. She is also a recreation coordinator, creating flyers detailing daily activities for retirees.
Nick is enlisting in the U.S. Navy.
As for Anastasia, “I like to get a good night’s sleep,” she quipped. “ I’m just kidding. As you take on special needs, there’s not a lot free time, but it ebbs and flows. I like to read and find little things to do for me.”
Read More: Man with Rare Condition Re-Grows Hair »

The UDP has seen 750 patients over the past six years, and a diagnosis has been made in 25 percent of the cases, Wise said. “We expect to enroll about 1,400 patients across all of the seven clinical sites over the next four years,” she added.
The benefits of the program go far beyond the chance for families to find a cure, Wise said. “It means lot to the patients, even if it’s a diagnosis that doesn't necessarily have a treatment. A lot of times they feel people don’t take them seriously, and that their doctors don’t necessarily know what to do. Having a diagnosis helps them end what for many of these patients have been years of a medical odyssey, trying to get to the point at knowing what they have. The program also provides genetic counseling, which can help with other family members that might be affected, and help them understand how this diagnosis might be relevant to their family in general, not just the patient,” she said.
Perhaps Anastasia summed up the benefit to patients and their families best: “This diagnosis has given me so much peace. It took a few months to realize that I didn't miss something. You worry about that all these years. Is there something I should have done? Should I have done something differently? People would ask, what do your kids have? Now I can say, this is what they have and this is how it happened," she said. "We've been really blessed with very good people.”
For information about applying to the UDN, visit http://rarediseases.info.nih.gov/undiagnosed
Publicado por salud equitativa en 8:17