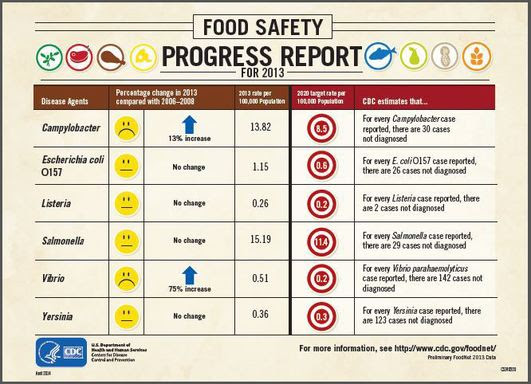 The nation’s food safety grades are out and the results are mixed.

What is FoodNet and why do they track trends in foodborne infections?

The Foodborne Diseases Active Surveillance Network (FoodNet) collects information to track rates and determine trends in laboratory-confirmed illnesses caused by nine pathogens transmitted commonly through food: Campylobacter, Cryptosporidium, Cyclospora, Listeria,Salmonella, STEC O157 and non-O157, Shigella, Vibrio, and Yersinia. Annual data are compared with data from a recent period (2006–2008) and with data from the preceding three years of surveillance (2010–2012) to measure progress.
FoodNet is a collaboration among CDC, ten state health departments, the US Department of Agriculture’s Food Safety and Inspection Service, and the Food and Drug Administration. FoodNet surveillance covers 48 million people, encompassing about 15 percent of the US population. The ten health departments represent the FoodNet surveillance sites and include the states of Connecticut, Georgia, Maryland, Minnesota, New Mexico, Oregon, and Tennessee, and selected counties in California, Colorado, and New York.

The data behind this year's report card

Incidence and Trends of Infection with Pathogens Transmitted Commonly Through Food — Foodborne Diseases Active Surveillance Network, 10 U.S. Sites, 2006–2013
Overall, in 2013, FoodNet logged just over 19,000 infections, 4,200 hospitalizations, and 80 deaths from the nine germs it tracks. Young children were the most affected group for seven of the nine germs that FoodNet tracks.
This information helps regulators, the food industry and consumers understand the progress we are making in preventing them.

Where can I get more information on this report and foodborne illness?