During 2010–2013, we recruited 16 persons with confirmed Mayaro virus infection in the Peruvian Amazon to prospectively follow clinical symptoms and serologic response over a 12-month period. Mayaro virus infection caused long-term arthralgia in more than half, similar to reports of other arthritogenic alphaviruses.
Since the discovery of Mayaro virus (MAYV) in Trinidad in 1954, the etiologic agent of Mayaro fever has been identified in French Guiana, Suriname, Venezuela, Peru, Bolivia, and Brazil (1–9). The presumed primary vectors, Haemagogus mosquitoes, inhabit rural settings and tree canopies, a factor that may explain the relative paucity of cases and restricted endemicity. However, Aedes aegypti mosquitoes have been shown to be competent vectors of MAYV in the laboratory (10), suggesting that an urban-dwelling arthropod could be a vector of this virus over a wider scale. MAYV infection has been demonstrated in tourists returning from the Amazon region, highlighting not only the need to consider MAYV in febrile returned travelers, but also a possible role in global transmission (11).
Incapacitating chronic joint pain has been described with other arthritogenic alphaviruses (12), but little is known about the prognosis and serologic response over long periods after MAYV infection. Therefore, we conducted a prospective 1-year longitudinal study to determine the clinical manifestations and to describe the serologic response among humans with Mayaro fever in the Peruvian Amazon Basin. 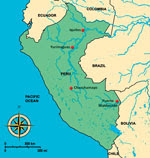 Figure 1. . . Map of Peru. Sites for study of Mayaro virus–infected patients are marked with a dot.
Persons identified for this cohort were recruited in a passive febrile surveillance study in 15 health centers in 4 Peruvian cities: Iquitos, Yurimaguas, Chanchamayo, and Puerto Maldonado (Figure 1). Persons meeting the following criteria were recruited: age > 5 years, oral/tympanic temperature > 38°C (or axillary > 37.5°C), and no obvious focus of infection. Written consent was obtained from all adults and from a parent or guardian for participants < 18 years of age; participants 8–17 years of age also provided written assent. The surveillance period of this study was December 6, 2010–April 30, 2012. Follow-up appointments continued for another year, through April 5, 2013. The institutional review boards of the US Naval Medical Research Unit No. 6 and the Peruvian Ministry of Health approved the protocol.