Campylobacteriosis is a reportable disease in Israel. Microbiology laboratories countrywide passively submit human isolates from all sources to the National Campylobacter Reference Laboratory, Israeli Ministry of Health, Jerusalem, for confirmatory testing. Species are identified by using standard methods (4). The reporting system and laboratory methods did not change during the study period of January 1, 1999–December 31, 2010.
For this study, patients’ date of birth and sex were retrieved using special permission by using identification numbers, which were subsequently replaced by unique numbers to retain patient anonymity. An infection episode was defined as the isolation of Campylobacter spp. from a single patient from any clinical source. Annual incidence rates for the study period were calculated by dividing the number of annual infection episodes by the population size retrieved from the Israeli Bureau of Statistics (5). The average age-specific annual incidence rate was calculated on the basis of the 12 annual incidence rates obtained for the study period. Because incidence counts and rates follow a Poisson distribution, Poisson regression models accounting for overdispersion were used to study annual trends of the incidence rate (dependent variable) for all isolates and for 2 major Campylobacter species, C. jejuni and C. coli; the calendar year was the independent variable. Poisson models were also used to study the effects of sex and age group on the incidence rates, adjusted for annual trends. All model effects were expressed by incidence rate ratio (IRR) and 95% CI. SAS software version 9.2 (SAS Institute, Cary, NC, USA) was used for all analyses. The study was approved by the Assaf Harofeh Medical Center local ethics committee.
During the study period, the Campylobacter Reference Laboratory confirmed 47,253 episodes of Campylobacter spp. infection. Most (> 99%) infections were C. jejuni (37,062 episodes, 78.43%) and C. coli (10,092 episodes, 21.36%); the remaining < 1% were C. fetus (25 episodes), C. upsaliensis (6 episodes), C. lari (2 episodes), or unidentified species (66 episodes). Bacteremia was noted for 331 (0.7%) episodes.
During the 12 study years, the annual incidence rate of all laboratory-confirmed Campylobacter spp. infection episodes increased 2.93-fold, from 31.04 to 90.99 cases/100,000 population. A similar increase was observed for C. jejuni (2.87-fold, 24.59 to 70.54 cases/100,000) and C. coli (3.06-fold, 6.38 to 19.54 cases/100,000). The linear annual increase in the incidence rate for the entire study period was 10.24% (95% CI 8.46–12.06) for all episodes, 10.07% (95% CI 8.42–11.74) for C. jejuni episodes, and 10.73% (95% CI 8.19–13.33) for C. coli episodes. A sharp rise in the annual increase rate, from 8.22% (95% CI 4.88–11.68) to 18.97% (95% CI 12.95–25.31), was noted between 1999–2006 and 2007–2010 (period I and period II) (Table).

Figure 1. . Annual incidence trends of laboratory-confirmed Campylobacter spp. infection, by species, Israel, 1999–2010.
Complete patient age and sex data were available for 38,092 (80.63%) of all infection episodes, including 29,931 (80.76%) C. jejuni infection episodes and 8,083 (80.09%) C. coli infection episodes. The annual incidence trends of Campylobacter spp. infection for the subgroup with complete demographic data were similar to those described for the entire group. Further age- and sex-related analyses were completed for episodes for which complete demographic data was available. IRR was 1.36 (95% CI 1.22–1.52) for male sex compared with female sex, adjusted for annual trends; similar elevated rates for male sex were found for C. jejuni (IRR 1.39, 95% CI 1.25–1.54) and C. coli (IRR 1.28, 95% CI 1.10–1.50) and for the 2 study periods (Figure 1; Table).
The age-specific average annual incidence rate formed an asymmetric, U-shaped curve. The highest average annual incidence rate occurred during the first decade of life (135.44 cases/100,000 population), and more specifically, during the first and second years of life (363.39 and 348.80 cases/100,000 population, respectively). The lowest average annual incidence rate occurred in the fifth decade of life (12.82 cases/100,000 population), with a slight increase toward the eighth decade of life (26.44 cases/100,000 population). 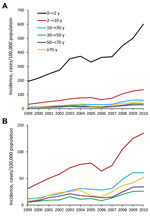 We found a sharp increase in the incidence of Campylobacter spp. infection in Israel, with rates tripling within just 12 years. This trend was observed for the 2 major Campylobacter species, C. jejuni and C. coli, and affected all age groups; the highest infection rates were seen during the first 2 years of life. Infection rates were substantially higher among children < 2 years of age compared with rates for other Western countries (6,7) but were comparable to that reported for New Zealand (8). The difference in incidence between this and the other age groups, forming a U-shaped curve, is more characteristic of rates for developing countries and is believed to be indicative of repeated exposure to Campylobacter spp. in early childhood that results in the acquisition of protective immunity at older age (9). Similar trends have also been described for defined subpopulations in the United Kingdom (10).
The global disproportional burden of campylobacteriosis among young children is far from being understood (11). A recent study could not show increased exposure to known risk factors in young children compared with other age groups (12). Increased susceptibility because of immature immune systems, environmental contamination, cross-contamination in the kitchen, hand-to-mouth behavior, and overreporting have all been implicated.
The rapid increase and high incidence of campylobacteriosis in Israel resemble that of New Zealand (13). A food source of Campylobacter spp. infection in Israel has not been elucidated; however, during the study period, poultry meat sales markedly transitioned from mainly frozen to mainly fresh or chilled products (S. Dolev, pers. comm.). Similar trends were implicated for the rising incidence in New Zealand and were successfully mitigated by supervising fresh poultry sales (13). However, toddlers who do not consume poultry had the highest incidence of Campylobacter spp. infection for both countries (8).
Our study was conducted using a large and comprehensive national database of laboratory-confirmed Campylobacter spp. infections that has a high rate of species characterization. However, laboratory-confirmed infections represent only a small portion of diarrheal diseases (14,15). Moreover, young children may be more likely to receive medical care and have stool cultured (14,15).
In conclusion, the rapid increase in Campylobacter spp. incidence in Israel illustrates the need for an urgent national intervention plan. In particular, high infection rates among young children should prompt intensive research efforts to discover the routes of exposure.
Dr Weinberger is the head of the Infectious Diseases Unit at Assaf Harofeh Medical Center, Zerifin, Israel and a senior lecturer at the Sackler School of Medicine, Tel Aviv University, Tel Aviv, Israel. Her primary research interest is the epidemiology of zoonotic infections, with a focus on foodborne infections.

We thank Sergio Dolev for his comments regarding poultry meat sale trends in Israel.