A Rift Valley fever (RVF) epidemic affecting animals on domestic livestock farms was reported in South Africa during January–August 2010. The first cases occurred after heavy rainfall, and the virus subsequently spread countrywide. To determine the possible effect of environmental conditions and vaccination on RVF virus transmissibility, we estimated the effective reproduction number (Re) for the virus over the course of the epidemic by extending the Wallinga and Teunis algorithm with spatial information. Re reached its highest value in mid-February and fell below unity around mid-March, when vaccination coverage was 7.5%–45.7% and vector-suitable environmental conditions were maintained. The epidemic fade-out likely resulted first from the immunization of animals following natural infection or vaccination. The decline in vector-suitable environmental conditions from April onwards and further vaccination helped maintain Re below unity. Increased availability of vaccine use data would enable evaluation of the effect of RVF vaccination campaigns.
Rift Valley fever (RVF) is a zoonotic arbovirosis caused by infection with a phlebovirus (family Bunyaviridae, genus Phlebovirus). The main vectors are specific Aedes and Culex spp. mosquitoes, and primary hosts are sheep, goats, and cattle (1,2). RVF epidemics usually occur after heavy rainfalls, which inundate ephemeral wetlands and enable large numbers of Aedes spp. mosquito eggs to hatch; it has been hypothesized that these mosquitoes harbor RFV virus (3–5). Virus transmission is sustained in locations with more persistent surface water, which provides suitable breeding conditions for other vectors, such as Culex sp. mosquitoes (6). RVF epidemics among animal herds cause abortion storms, affecting all stages of pregnancy, and high death rates among neonates. Epidemics among humans often cause influenza-like illness, although severe conditions (e.g., hemorrhagic fever and death) have been reported (1,2). 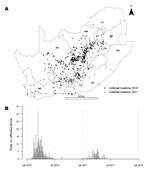 Figure 1. . Rift Valley fever epidemic, South Africa, 2010–2011. A) Location of cases. Unmarked area in center right is Lesotho (no data). B) Epidemic curve for the 2 years. NC, Northern Cape;...
RVF epidemics occurred in South Africa in 1950–1951 (7), 1973–1975 (8), and 2010–2011. The 2010 wave started in January and February in Free State Province and subsequently spread to almost all provinces in South Africa (Figure 1, panel A). Animals from a variety of species were affected (e.g., cattle, sheep and goats, buffaloes, camels, and other wild animals), and 95% (n = 470) of the affected farms raised cattle, small ruminants (sheep/goats), or both (9). The incidence peaked in March, and the last case of that wave was reported in August 2010. The epidemic resumed in January 2011, affecting 124 farms, mainly in Eastern Cape Province (Figure 1, panel B) (10). The start of the 2010 epidemic was attributed to heavy rainfall in January and February (11,12). The fade-out of the 2010 wave could be attributed to several factors: a depletion of susceptible hosts after natural infection or vaccination (13); a change of environmental conditions affecting the sustainability of vector breeding, such as a decrease in temperature (14); the drying of wetlands; or a combination of these factors.
The effective reproduction number (Re) is a key epidemiologic parameter that measures the transmission potential of the causative agent of a disease during an epidemic. Re is defined by the number of secondary infections resulting from 1 infectious case in a population in which some members are already immune (15). When Re is above 1, the infection spreads; maintenance of Re below 1 is required to stop an outbreak (16).
The objective of this study was to estimate Re at the farm level over the course of the 2010 RVF epidemic wave in South Africa by applying the Wallinga and Teunis transmission tree–reconstruction method (17), extended to use geographic information. By tracking the transmission potential of the virus and comparing our findings with data on vaccination and climate (rainfall and temperature), we determined plausible reasons for fade-out of the epidemic wave.