3 Million
About 3 million adults in the US are infected with the hepatitis C virus, most are baby boomers.

3 in 4
Up to 3 in 4 people who are infected don't know they have hepatitis C so they aren't getting the necessary medical care.

1945-1965
Baby boomers, anyone born from 1945 through 1965, should get tested for hepatitis C.
Hepatitis C is a serious virus infection that over time can cause liver damage and even liver cancer. Early treatment can prevent this damage. Too many people with hepatitis C do not know they are infected, so they don't get the medical care they need.
Once infected with the hepatitis C virus, nearly 8 in 10 people remain infected for life. A simple blood test, called a hepatitis C antibody test, can tell if you have ever been infected, but cannot tell whether you are still infected. Only a different follow-up blood test can determine if you are still infected. CDC data show only half of people with a positive hepatitis C antibody test had the follow-up test reported to the health department. The other half did not have a follow-up test reported, although some of them may have been tested. Without the follow-up test, a person will not know if they still have hepatitis C and cannot get the medical care they need.
Baby boomers (people born from 1945 through 1965) can:
Doctors, nurses and other health care providers can:

Many baby boomers got infected before the dangers of hepatitis C were well known.


People Who Should be Tested 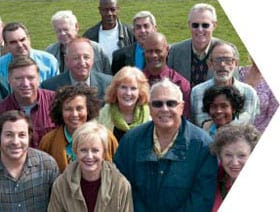 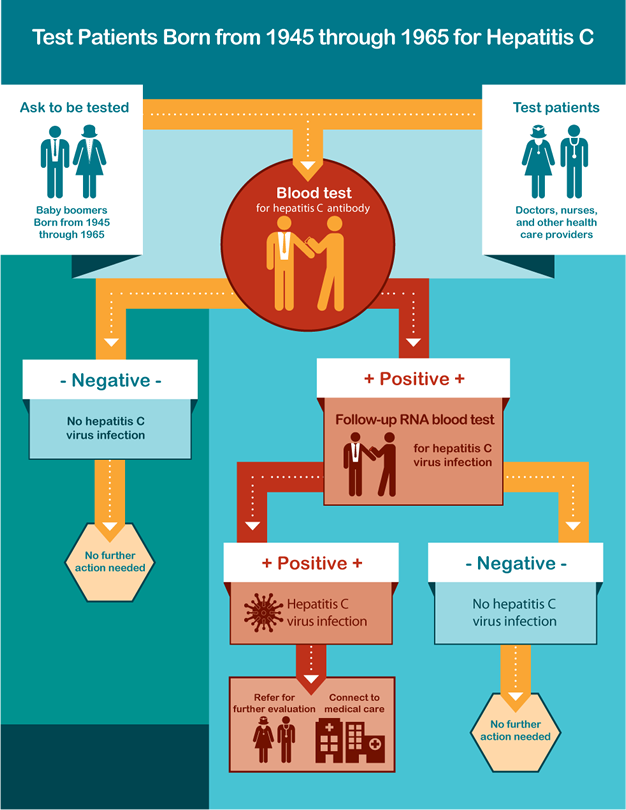 What Can Be Done

Doctors, nurses, and other health care providers can:

Baby boomers and all persons at risk can:

People living with hepatitis C can:

Science Behind this Issue

On Other Web Sites

On May 7, 2013, this report was posted as an MMWR Early Release on the MMWR website (http://www.cdc.gov/mmwr).

Background: Hepatitis C virus (HCV) infection is a serious public health problem. New infections continue to occur, and morbidity and mortality are increasing among an estimated 2.7–3.9 million persons in the United States living with HCV infection. Most persons are unaware of their infection status. Existing CDC guidelines for laboratory testing and reporting of antibody to HCV do not distinguish between past infection that has resolved and current infection that requires care and evaluation for treatment. To identify current infection, a test for HCV RNA is needed.
Methods: Surveillance data reported to CDC from eight U.S. sites during 2005–2011 were analyzed to determine the proportion of persons newly reported on the basis of a positive test result for HCV infection. Persons reported with a positive result from an HCV antibody test only were compared with persons reported with a positive result for HCV RNA and examined by birth cohort (1945–1965 compared with all other years), surveillance site, and number of reported deaths. Annual rates of persons newly reported with HCV infection in 2011 also were calculated for each site.
Results: Of 217,755 persons newly reported, 107,209 (49.2%) were HCV antibody positive only, and 110,546 (50.8%) were reported with a positive HCV RNA result that confirmed current HCV infection. In both groups, persons were most likely to have been born during 1945–1965 (58.5% of those who were HCV antibody positive only; 67.2% of those who were HCV RNA positive). Among all persons newly reported for whom death data were available, 6,734 (3.4%) were known to have died; deaths were most likely among persons aged 50–59 years. In 2011, across all sites, the annual rate of persons newly reported with HCV infection (positive HCV antibody only and HCV RNA positive) was 84.7 per 100,000 population.
Conclusions: Hepatitis C is a commonly reported disease predominantly affecting persons born during 1945–1965, with deaths more frequent among persons of relatively young age. The lack of an HCV RNA test for approximately one half of persons newly reported suggests that testing and reporting must improve to detect all persons with current infection.
Implications for Public Health: In an era of continued HCV transmission and expanding options for curative antiviral therapies, surveillance that identifies current HCV infection can help assess the need for services and link persons with infection to appropriate care and treatment.
Introduction
In the United States, hepatitis C virus (HCV) infection is a common bloodborne infection. Based on data from national surveys, an estimated 3.2 (95% confidence interval [CI] = 2.7–3.9) million persons in the United States are living with hepatitis C (1). Once infected, approximately 80% of persons remain infected (i.e., chronically infected) and are at risk for substantial morbidity and mortality in later life (2). Although treatment can be curative, an estimated 45%–85% of infected persons are unaware of their HCV infection (3). HCV infection is a major cause of liver disease, including cirrhosis and liver cancer (4–7), and in the United States, is the leading indication for liver transplantation (8). Moreover, rates of liver cancer and deaths from HCV infection have increased over time; approximately 15,000 HCV-associated deaths were recorded in 2007 (4,9). In addition, considerable costs are associated with HCV infection, both in lost productivity and health-care expenditures (10–11).
CDC guidelines for HCV laboratory testing and reporting, published in 2003, do not focus on identifying persons with current infection (12); therefore, depending on the HCV test used, reports to surveillance programs can include persons with a test result indicating past HCV infection that has resolved and also persons with a test result that identifies current HCV infection. Analysis of state and local surveillance data can be used to assess the proportion of persons who might need additional testing to discriminate previous resolved infection from current infection. Analysis of such data also can estimate the number of persons with current HCV infection requiring clinical assessment for treatment, as well as guide prevention strategies. In addition, these surveillance data can serve as a baseline for indirectly evaluating use of the recent HCV testing recommendations to identify HCV infection among persons born during 1945–1965, a group that demonstrates the highest prevalence of infection, compared with those born in other years (3). Finally, examining mortality patterns among persons reported with current HCV infection can improve understanding of the natural history of the disease.
Methods
In 2011, CDC supported surveillance for HCV infection at eight U.S. sites (Colorado, Connecticut, Minnesota, New Mexico, New York City, New York state, Oregon, and San Francisco). CDC began receiving data in 2005 from four sites (Colorado, Minnesota, New York state and Oregon), one site in 2006 (New Mexico), two sites in 2008 (New York City and San Francisco), and one site in 2009 (Connecticut). For all sites, clinical laboratories reported only positive test results of HCV infection (i.e., from HCV antibody testing or from HCV RNA testing); health departments did not require reporting of negative results. Reports were reviewed and de-duplicated to ensure that persons with newly reported positive HCV test results were included only once in the surveillance database.
For this analysis, persons reported to CDC during 2005–2011 were categorized as 1) reported with only a positive test result for HCV antibody (HCV antibody positive only) or 2) reported with a positive HCV RNA result from HCV nucleic acid testing or HCV genotyping (HCV RNA positive). Persons who tested HCV antibody positive only were considered as having had a past HCV infection that had resolved, a false-positive test result, or current HCV infection. Persons who tested HCV RNA positive were considered currently HCV infected. Although no laboratory test exists to distinguish acute from chronic HCV infection, for the purpose of this study all persons determined to be currently infected were considered to have chronic infection.
Each group (HCV antibody positive only and HCV RNA positive) was examined by birth cohort (1945–1965 compared with all other birth years) and surveillance site. Annual rates of all persons newly reported per 100,000 population in 2011 also were calculated for each site using denominators available from U.S. Census population estimates (available at http://www.census.gov/compendia/statab

full-text ►
Testing for HCV Infection: An Update of Guidance for Clinicians and Laboratorians


Testing for HCV Infection: An Update of Guidance for Clinicians and Laboratorians