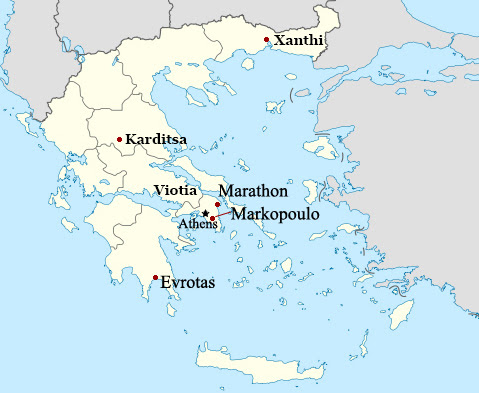 
The Centers for Disease Control and Prevention (CDC) has received information that there have been five additional P. vivax malaria cases identified in Greece; four that are locally-acquired cases in Greek residents with no previous travel, and one case in an immigrant. Between January 1 and October 22, 2012, Greece has reported a total of 75 cases of malaria.  Of those 75 cases, 47 were caused by P. vivax (16 are locally acquired, 2 are relapses, and the remainder occurred in immigrants). Cases among immigrants from P. vivax-endemic countries, could have either been imported or acquired locally. The immigrants reported being in Greece from as short as a few days before onset of symptoms to as long as 4 years before the onset of symptoms, therefore these cases could have been either locally transmitted or imported.

The four new locally-acquired cases occurred in locations where malaria had been previously identified.  Three new cases were identified in an agricultural area of Evrotas, Lakonia.  Another case was reported in Sofades, Karditsa.

The Hellenic CDC continues to work with the European CDC and has responded by enhancing its surveillance systems for malaria cases and malaria vectors. In current- and previously affected- areas, mosquito control has been intensified, healthcare providers educated about early malaria diagnosis and treatment, and the public has been informed about the symptoms of malaria and the prevention of mosquito bites.

Given that there continues to be new cases of locally transmitted malaria in Lakonia, CDC will continue to recommend preventive antimalarial drugs for travel to the agricultural areas of Evrotas in the Lakonia region.  With the approach of winter in the coming month, it is fully anticipated that this recommendation will change in the near future. If traveling to the affected areas, discuss the benefits and risks of taking malaria prophylaxis based on your itinerary, duration of travel, and activities--as well as your other medications and health conditions--with a health care provider knowledgeable about travel medicine. Mosquito avoidance measures are also recommended, such as insect repellant and sleeping in either an air conditioned or well-screened setting or under a treated bed-net, to prevent malaria infection. Malaria prophylaxis is not currently recommended for travelers to the affected areas of Karditsa, Marathon, Markopoulo, Viotia, and Xanthi. Travelers to these areas should rely on mosquito avoidance measures to prevent malaria infection.