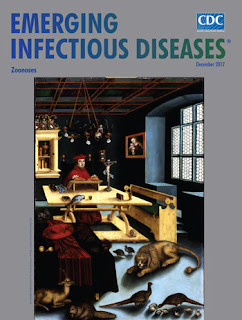 Argas vespertilionis, an argasid tick associated with bats and bat habitats in Europe, Africa, and Asia has been reported to bite humans; however, studies investigating the presence of vector-borne pathogens in these ticks are lacking. Using molecular tools, we tested 5 A. vespertilionis ticks collected in 2010 from the floor of a bat-infested attic in southwestern France that had been converted into bedrooms. Rickettsia sp. AvBat, a new genotype of spotted fever group rickettsiae, was detected and cultivated from 3 of the 5 ticks. A new species of the Ehrlichia canis group, Ehrlichia sp. AvBat, was also detected in 3 ticks. Four ticks were infected with Borrelia sp. CPB1, a relapsing fever agent of the Borrelia group that caused fatal borreliosis in a bat in the United Kingdom. Further studies are needed to characterize these new agents and determine if the A. vespertilionis tick is a vector and/or reservoir of these agents.
Ticks are obligate hematophagous arthropods that are considered to be second only to mosquitoes as vectors of agents that cause diseases in humans (1). Ticks parasitize every class of vertebrates in most regions of the world and occasionally bite humans (1). Argas vespertilionis (also known as Carios vespertilionis) ticks parasitize several bat species around the world, except in the Americas (2,3). Bats are adequate hosts for blood ingestion by ticks because they lack dense fur and have a supply of large blood vessels just below the dermis. In addition, a larval A. vespertilionis tick was collected from a dog in Sweden (3). Common habitats for these ticks include cracks and crevices in the walls of bat-infested caves and buildings, tree holes, and any niche occupied by the host. Tick nymphs and adults can bite persons in caves (4,5). A. vespertilionis tick populations in Europe and South Africa exist in temperate climates with pronounced seasonal changes and moderate to heavy rainfall.
The role of A. vespertilionis ticks as vectors or reservoirs of bacterial, viral, or protozoal pathogens is poorly understood; however, several pathogens have been detected in these ticks. In 1966, Coxiella burnetii, the agent of Q fever, was detected in A. vespertilionis ticks collected from southern Kazakhstan (6), and in 1973, an arbovirus named Issyk-Kul virus was isolated from bats and A. vespertilionis ticks in Kyrgyzstan (7). A few years later, Issyk-Kul virus was isolated from a scientist who had become infected while conducting field work in the Kumsangir district of southern Tajikistan (8). Candidatus Babesia vesperuginis showed potential pathogenicity to a bat in the United Kingdom, and the study authors hypothesized that the A. vespertilionis tick could be a vector for these protozoa (9). Borrelia burgdorferi sensu lato, the infectious agent of Lyme disease, was detected in A. vespertilionis ticks that were collected during 1896–1994 and housed at the Natural History Museum in London. Thus, 13/13 ticks collected from bats (mostly pipistrelles) and 12 (75%) of 16 ticks collected from human dwellings had results positive for B. burgdorferi s.l. when tested by nested PCR targeting the ospA gene (10). However, PCR contaminations were not excluded for these results. It has been stated that this tick is a vector of spirochetes in bats, but no conclusive evidence has supported this hypothesis (2).
The WHO (World Health Organization) Collaborative Center for Rickettsial Diseases and other Arthropod-Borne Bacterial Diseases receives human samples and arthropod specimens from all parts of the world for tick-borne disease diagnosis. The aim of this study was to analyze A. vespertilionis ticks for the presence of Borrelia, Rickettsia, Bartonella, and Ehrlichia spp. and for C. burnetii by using molecular and culture tools.
Publicado por salud equitativa en 7:29