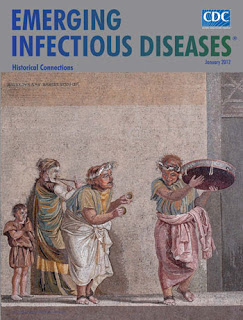 Since January 2007, a total of 11 rabid deer from 4 deer farms have been identified in 2 neighboring Pennsylvania counties. Vaccination of deer against rabies, decreasing wildlife animal contact with deer, and education of deer farmers may prevent further cases of rabies in captive deer and exposures to humans.
Rabies is an acute progressive encephalitis caused by highly neurotropic zoonotic lyssaviruses. The disease is nearly always fatal in humans if postexposure prophylaxis (PEP) is not administered promptly after exposure (1,2). Although human cases of rabies are rare in the United States, each year nearly 7,000 rabid animals are reported and ≈35,000 humans receive PEP (3,4).

Figure 1. Reports of suspected and confirmed rabies among all animals (excluding bats) in Pennsylvania, 2010.
Since January 2007, a total of 11 rabid deer from 4 deer farms were identified in the neighboring counties of Lancaster and Chester, Pennsylvania, USA. These farms were located with a 45-mile radius in an area of high prevalence for rabies among all animals (excluding bats) (Figure 1). We investigated this cluster to identify factors that might have contributed to disease transmission, assess the risk to humans, and provide recommendations for prevention.

Figure 2. Rabies deaths among captive deer at 4 farms in Lancaster and Chester counties, Pennsylvania, USA, 2007–2010.
The death of a rabid captive deer, an adult doe, was reported initially in August 2007 at farm A; during October 2007–January 2008, three buck fawns from this farm also died of rabies (Figure 2). In April 2008 and December 2009, two adult does died of rabies at farm B and farm C, respectively (Figure 2). Lastly, during July 2010, one adult doe, followed by 4 buck fawns, died at farm D (Figure 2). All reported cases were laboratory confirmed, and diagnostic testing detected a rabies virus variant associated with raccoons.
Publicado por salud equitativa en 9:37