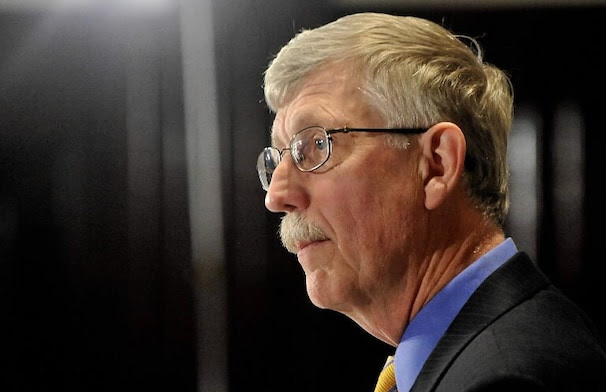 Dr. Francis Collins is the director of the National Institutes of Health (NIH).
full-text:
Mapping the NIH’s leadership DNA - The Washington Post

Dr. Francis S. Collins is the director of the National Institutes of Health (NIH), overseeing an institution that is the largest supporter of biomedical research in the world. A physician-geneticist, Collins is noted for his landmark discoveries of disease genes and his leadership of the international Human Genome Project, which culminated in April 2003 with the completion of a finished sequence of the human DNA instruction book. He served as director of the National Human Genome Research Institute at the NIH from 1993 through 2008. This interview was conducted by Tom Fox, author of the Washington Post’s Federal Coach blog.
What leadership lessons did you learn as director of the National Human Genome Research Institute?
One of the things I learned is that I am best as a leader if I surround myself with people who are smarter than I am. One of my favorite quotes is from Woodrow Wilson: “I not only use all the brains that I have, but all that I can borrow.” Then I have to be totally willing to listen to those wise heads, soaking up all of their expertise, but also encouraging them to tell me bad news. I value people most who are willing to come to me and say, “You know, you’re about to make a big mistake.”
Were there other leadership lessons?
With the Human Genome Project, it was clear that success would only be possible if we recruited the best and brightest scientists. To do that, the vision had to be compelling – and it was! But some of those recruits had substantial egos, so once they came on board there was the challenge of how to develop this into a team effort.  I found it best to allow a lot of latitude for the team members to shape the enterprise, but with the clear message that ultimately there had to be a joint, shared conclusion about the goals, timetables and quality standards. We could talk about many options, but ultimately somebody, and in the case of the Human Genome Project it was me, had to make decisions about the plan. Then the team, having had the chance to weigh in, would nearly always sign on, because at that point they believed in the goal. They owned it too.
How do you motivate your employees at NIH?
We’re the largest supporter of biomedical research in the world. We are the place where ideas get generated and supported that are going to change the face of medicine, reduce suffering, prolong life and give everybody a better chance at health. So at NIH you don’t have to wake up in the morning and question whether what you are doing has value. But still the daily experience can be exhausting and frustrating, and right now federal employees of all sorts are being targeted as inefficient and dispensable – which is very hurtful and unjustified. So I think it is helpful for employees to see concrete evidence that their work is leading to great things on a regular basis. When new scientific advances occur, we celebrate that. We cheer for those who have made those things happen.
What are you doing to make NIH attractive to the next generation of doctors and scientists?
Many young people are motivated to find a way to give something to the world. NIH provides a phenomenal opportunity to do so. The scientific and medical opportunities have never been more amazing. I do worry, however, that young people also hear the message that resources are increasingly constrained. One of my challenges is to make sure that the message about the sustainability and future promise of biomedical research is coming across, even if we have to tighten our belts right now.
An important issue: We have not been as successful as we should be in bringing scientists into our workforce from traditionally underrepresented groups. We are missing out on some of the best and brightest minds from the Native American, Latino and African American communities. It’s one of my personal priorities to make it clear that the biomedical research community is an environment where everyone with a great idea is going to be welcome.
How do you deal with the stress of the job?
I’m up every day about 4:30 or 5 a.m. One of my stress releasers is exercise. I had my once-a-week trainer at the house this morning at 5:45 a.m. and I was in a total pool of sweat an hour later. But I felt great for the rest of the day. I’m also a person of faith, and my faith is a great source of peace and comfort for me in the midst of a storm. And music is a good release too. When I’ve had a particularly tough day, the first thing I often do when I walk into the house is sit down at the piano. For me, that’s a way to release the tension and get in tune with things that may be a bit muddled in my head after a long day.
Has music helped you in other ways?
I find there is nothing like sharing music to knock down barriers between people. When I was working on cystic fibrosis research, and hopes for a cure were taking longer than anyone wanted, I was asked to give a plenary address to about 3,000 parents, affected kids, care providers and researchers. I wrote a song called “Dare to Dream” to include at the end of the presentation. That’s an experience I won’t forget. Three thousand people on their feet, many of them with tears in their eyes, singing the chorus, sharing in the belief that it was good to dare to dream– even if the dream hadn’t yet come true. There was something about that moment that words alone could not have achieved.