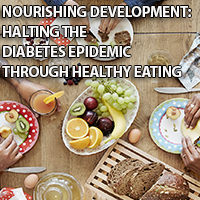 In order to reaffirm its position as the global advocate for people with diabetes, IDF is holding a side event on May 19 focused on the positive impact healthy eating can have on diabetes management and sustainable development. The event, hosted by Petra Wilson – IDF CEO – and Sir Michael Hirst – IDF President – will feature the following speakers:
• Dr Etienne Krug, Director of WHO Department for Management of Non-communicable Diseases, Disability, Violence and Injury Prevention
• Dr Francesco Branca, Director of WHO Department of Nutrition for Health and Development
• Mr Veli-Mikko Niemi, Director General, Ministry of Social Affairs and Health of Finland
• Dr Mauricio Hernández, Director, Public Health Institute of Mexico
• Prof Akhtar Hussein, Professor of Community Medicine, Institute of Health and Society of the University of Oslo
• Ms Louise Ansari, Director of Communications and Prevention of Type 2 Diabetes, Diabetes UK
This event will also mark the soft launch of the World Diabetes Day (WDD) Campaign. WDD 2015 activities and materials will focus on healthy eating. In particular, on the importance of accessing healthy food to help prevent the onset of type 2 diabetes and effectively manage all types of diabetes to avoid complications.
WDD is celebrated every year on 14 November. To reflect the reality of diabetes as a long term condition, WDD is now becoming a year-long campaign running from May until December in 2015.
Campaign materials will be staggered over the year and will be made available on the WDD website On March 29, chef and campaigner Jamie Oliver launched a global petition to persuade the governments of the G20 countries to provide their nations’ children with the basic “human right” of food education in schools. The petition forms part of the Food Revolution Day campaign.
IDF estimates that up to 70% of type 2 diabetes cases can be prevented or delayed through the adoption of healthier lifestyles. In line with the World Diabetes Day theme of Healthy Eating, IDF is supporting the petition, through online activities, as part of a global effort to demand immediate action to halt the rise in obesity and type 2 diabetes cases among young people.
To date the petition has reached over 850,000 signatures from over 180 countries, and it is to be hoped that it will reach 1 million signatures by May 15, Food Revolution Day!
To add your name to the petition, go to change.org/jamieoliver.
For more info, see foodrevolutionday.com.

IDF G7 Campaign
The G7 Summit, will take place on June 7 and 8. Priorities for the German presidency, include sustainable development and the post-2015 agenda.
IDF alongside national parliamentarians will take this opportunity to call for action on diabetes in the G7 countries. An online campaign will run for the duration of the Summit and parliamentarians from the IDF network will present a tailored call to action in their national plenary sessions stressing the impact soaring diabetes rates have on development. More information on this campaign will be available via IDF Twitter and Facebook.
Publicado por salud equitativa en 9:05