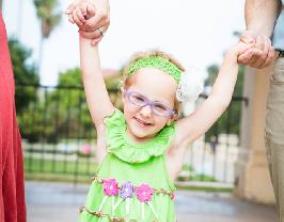 Eve Troy is a vivacious, bright, engaging, and spirited three year old. She was born on December 29, 2010 in San Diego, California. Over the course of the first three to four month's of Eve's life, Eve's parents discovered she was deaf, unable to eat , has an eye condition called corneal anesthesia, and has significant motor delays (she has since been diagnosed with a form of cerebral palsy). Eve's doctors were perplexed and could not give Eve's parent's any information or explanation for why Eve suffered with these challenges.
When Eve was about eighteen months, after dozens and dozens of Google searches, Eve's mother came across information regarding a condition called Pontine Tegmental Cap Dysplaisa ("PTCD") which seemed to match Eve's array of symptoms. Eve's mom confirmed the diagnosis with several doctors in different parts of the world who are familiar with the condition. Although Eve still struggles with her challenges, with the help of many therapists, Eve is learning to eat, learning to walk, and she is learning sign language to communicate.
Diagnosis in hand, Eve's parents have since connected with and shared stories numerous other families of patients with PTCD. Connecting with these other families has been critical to understanding Eve's array of medical issues and has provided her parents with a wealth of information and support. You can learn more about Eve on her mom's blog located at - http://allaboutevetroy.blogspot.com/