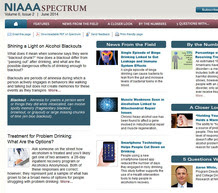 
NIAAA Spectrum is an online Webzine published by the National Institute on Alcohol Abuse and Alcoholism. It features the latest news from the alcohol research field, storytelling graphics, and interviews with NIAAA staff and researchers from the field. The latest issue is now available. The full table of contents is presented below.

Shining a Light On Alcohol Blackouts

What does it mean when someone says they were “blackout drunk?” How does a blackout differ from “passing out” after drinking, and what are the possible dangerous effects of drinking enough to blackout Blackouts are periods of amnesia during which a person actively engages in behaviors like walking and talking but does not create memories for these events as they transpire. More...

Treatment for Problem Drinking: What Are the Options?

Ask someone on the street how alcoholism is treated and you’ll likely get one of two answers: a 28-day inpatient recovery program or Alcoholics Anonymous. Both of these responses are correct; however, they represent just a sample of what has grown to be a broad menu of options for people struggling with problem drinking. More...

News From the Field

Single Episode of Binge Drinking Linked to Gut Leakage and Immune System Effects
A single episode of binge drinking can cause bacteria to leak from the gut and increase levels of bacterial toxins in the blood.
Muscle Weakness Seen in Alcoholism Linked to Mitochondrial Repair Issues
Chronic heavy alcohol use has been found to affect a gene involved in mitochondrial repair and muscle regeneration.
Smartphone Technology Helps People Cut Down on Drinking
People using a new smartphone-based app reduced the number of days they engaged in risky drinking. This study further supports the use of e-Health intervention tools to help people in alcoholism recovery.
Minimum Legal Drinking Age Shown to Save Lives
A review of studies published since 2006 further confirms that setting the minimum legal drinking age to 21 saves lives and prevents a range of other alcohol-related harms.

Percentage of Drinkers Receiving Treatment
An estimated 18 million Americans have an alcohol use disorder—a medical term that includes both alcoholism and harmful drinking. Research shows, however, that of all the people with an alcohol use disorder, only about 15 percent ever receive treatment. Why? More...

“Holding Your Liquor” Holds a Warning
The ability to “hold your liquor” is a source of pride for some people. This tolerance or “low level of response” to alcohol doesn’t offer protection from alcohol problems; instead, it’s a reason for caution.