Most insect bites are harmless, though they sometimes cause discomfort. Bee, wasp, and hornet stings and fire ant bites usually hurt. Mosquito, flea, and mite bites usually itch. Insects can also spread diseases. In the United States, some mosquitoes spread West Nile virus. Travelers outside the United States may be at risk for malaria and other infections.
To prevent insect bites and their complications 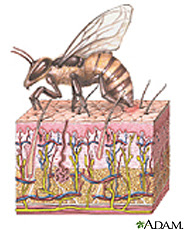