A global community free from violence

To collaborate on global efforts to prevent violence by developing and disseminating science-based knowledge and practice
Violence causes more than 1.6 million deaths worldwide every year.1 More than 90% of these occur in low- and middle-income countries.1 Violence is one of the leading causes of death in all parts of the world for persons ages 15 to 44.1 But the Centers for Disease Control and Prevention (CDC) is working to change that. CDC is committed to building a world free of violence.
CDC conducts research on violence, its causes, and effective prevention strategies. Studies have shown there are personal, peer, family, and social factors that may increase or reduce the chances that a person will become a victim or perpetrator of violence. CDC and its partners use this science-based information to help agencies and governments around the world develop programs to prevent violence-related injuries and deaths.

World Report on Violence and Health

, which is the first full look at the problem of violence worldwide—what it is, who it affects, and what we can do about it. More than 160 experts from all parts of the globe contributed. The report shows how a science-based public health approach can help prevent violence. It encourages governments to create a national plan of action for violence prevention; to build their data collection and research ability; to promote primary prevention responses, and to strengthen emergency response systems and services for victims of violence. More than 50 countries had national launches of the report, and more than 25 countries have developed plans of action for violence prevention based on its recommendations.

In another landmark project, CDC worked with UNICEF and other partners to conduct the first national survey on violence against children—with a focus on sexual violence—in Swaziland (females ages 13-24).The survey showed one-third of the girls in Swaziland had experienced sexual violence prior to the age of 18. About three-fourths of the perpetrators were boys or men from their neighborhoods, boyfriends or husbands, or male relatives. Sexual violence was associated with increased chances of depression, thoughts of suicide, unwanted pregnancy, pregnancy complications or miscarriages, and sexually transmitted diseases—including HIV/AIDS.To address the sexual violence problem, Swaziland created a national education campaign to expand awareness and prevention, a safe court system for survivors, a child-friendly court with safe spaces for children's testimony, safe school programs, and greater capacity for police to enforce the law—with new units responsible for investigating sexual violence against minors. Swaziland also used survey data to improve policies.Meanwhile, the Swaziland survey sparked interest in other countries. Tanzania recently launched the results of their survey

. Surveys in Kenya and Zimbabwe are underway to understand the causes and scale of sexual violence in their nations as well.

Together for Girls Project

CDC is one of 10 public and private organizations working together to end sexual violence against girls. The global partnership, Together for Girls, was launched at the annual meeting of the Clinton Global Initiative on Sept. 25, 2009.The partnership builds on the work done in Swaziland, starting in 2007 with the national survey on the causes and scale of sexual violence. Together for Girls now centers on three pillars: 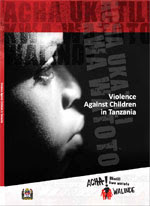 , which was coordinated by UNICEF and conducted by CDC with support from Muhimbili University of Health and Allied Sciences (MUHAS) and a Multisectoral Task Force.
The survey documents the scale of sexual, physical and emotional violence during childhood and in the 12 months preceding the survey, and includes findings for girls and boys.
More information on other activities