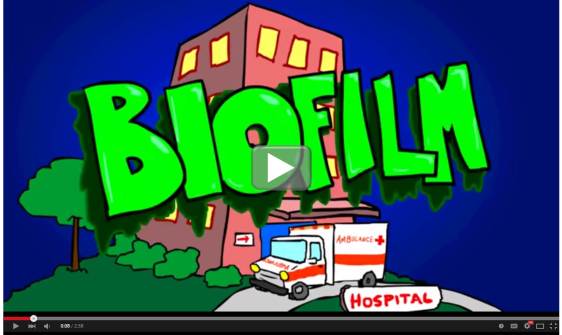 Periodically, I’ve posted some of the winners of the video competition to celebrate the Tenth Anniversary of the NIH Common Fund. After an intermission of several months, our scientific film fest is back to take another bow. This cool animation shows what some NIH-funded researchers are doing to address a serious health threat: hospital-acquired infections. Such infections can lead to hard-to-heal wounds, such as the foot sores that can trouble people with diabetes, and pressure ulcers in the elderly.
The stubbornness of such wounds owes, in part, to the infection-causing bacteria joining forces to improve their chances of survival within the injury. These microbes literally stick together to form microbial communities, called biofilms, that can resist antibiotics and evade our immune defenses. This strength in numbers has researchers pondering strategies that target the entire biofilm in innovative ways. One promising possibility involves exploiting metabolomics, which tracks the products produced by the bacterial troublemakers, and may provide new perspectives on how to battle this increasingly common healthcare problem.
The video was made by the laboratory of Mary Cloud Ammons at Montana State University in Bozeman. Ammons, who receives research support through the NIH Common Fund to study bacterial metabolomics, describes her work in this way: “The sixth leading cause of death in the United States is the result of hospital-acquired infections, which often result in nonhealing wounds colonized by communities of bacteria call biofilms. The research in our lab aims to uncover the mechanisms at the root of the deviation from the normal healing process that results in the development of chronic wounds. These metabolomic studies identify specific metabolite profiles that may be associated with pathogenicity in the chronic wound and could potentially be used in novel noninvasive diagnostics.”
Links:
Ammons Lab (Montana State University, Bozeman)
Ammons NIH Project Information (NIH RePORTER)
Common Fund (NIH)