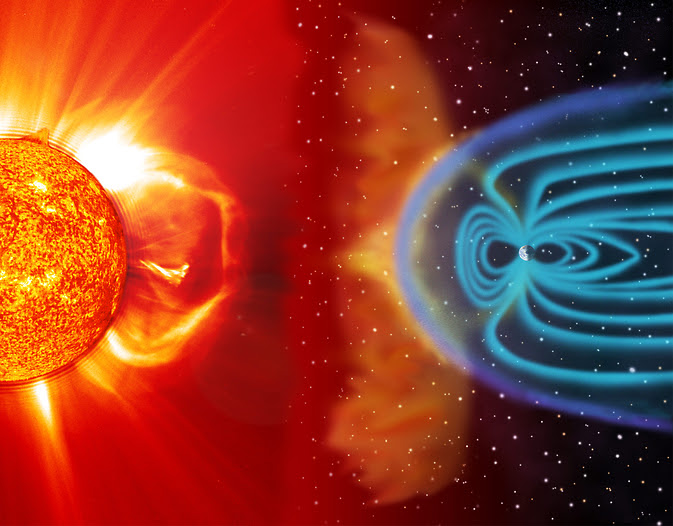 NASA’s space radiobiology research aims to mitigate the harmful effects of the space radiation environment on astronaut health outside of the relative protection of the Van Allen belts (pictured in blue)
Image Credit:
NASA/SOHO
NASA's Human Research Program will fund nine proposals for ground-based research that will help enable extended and safer human exploration of space by quantifying and, ultimately, reducing the risks posed by space radiation.
Using beams of high-energy, heavy ions that simulate space radiation, the research will employ new experimental approaches to understand better the role of space radiation in the development of cancer, heart and circulatory disease, and long-term cognitive function problems.
These studies will be conducted at NASA’s Space Radiation Laboratory at the Brookhaven National Laboratory in Upton, New York. The proposals were in response to the research announcement, "Ground-Based Studies in Space Radiobiology."
NASA is committed to astronaut health and safety as we look to go beyond the relative safety of low-Earth orbit and set our sights on exploring deeper into our solar system, including missions to an asteroid and Mars. Exposure to the high radiation levels of interplanetary space is a major challenge NASA is addressing on its journey to Mars. These investigations will help reduce the uncertainties and risks associated with the effects of human radiation exposure on deep space missions.
The selected proposals were submitted by seven institutions that will receive a total of approximately $12.5 million over a one- to four-year period.
The Human Research Program is managed by the Space Life and Physical Sciences Division of NASA's Human Exploration and Operations Mission Directorate at the agency’s Headquarters in Washington.
For a complete list of the selected proposals, principal investigators, and organizations, visit:
http://go.nasa.gov/1tls8cj
-end-
Joshua Buck
Headquarters, Washington
202-358-1100
jbuck@nasa.gov
William Jeffs
Johnson Space Center, Houston
281-483-5111
william.p.jeffs@nasa.gov
Publicado por salud equitativa en 11:15