Ebola Virus Disease in the Democratic Republic of Congo — NEJM

Ebola Virus Disease in the Democratic Republic of Congo — NEJM 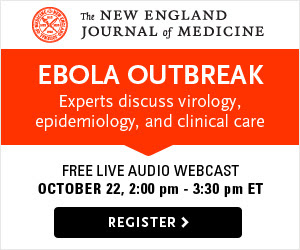 MEDIA IN THIS ARTICLE

Response to the Outbreak of Ebola Virus Disease in the DRC.
FIGURE 1

Geographic Location of Patients in the EVD Outbreak in the Democratic Republic of Congo (July 26–October 7, 2014).

Ebola Virus Disease in the Democratic Republic of Congo

The seventh reported outbreak of Ebola virus disease (EVD) in the equatorial African country of the Democratic Republic of Congo (DRC) began on July 26, 2014, as another large EVD epidemic continued to spread in West Africa. Simultaneous reports of EVD in equatorial and West Africa raised the question of whether the two outbreaks were linked.
Full Text of Background...

We obtained data from patients in the DRC, using the standard World Health Organization clinical-investigation form for viral hemorrhagic fevers. Patients were classified as having suspected, probable, or confirmed EVD or a non-EVD illness. Blood samples were obtained for polymerase-chain-reaction–based diagnosis, viral isolation, sequencing, and phylogenetic analysis.
Full Text of Methods...

The outbreak began in Inkanamongo village in the vicinity of Boende town in Équateur province and has been confined to that province. A total of 69 suspected, probable, or confirmed cases were reported between July 26 and October 7, 2014, including 8 cases among health care workers, with 49 deaths. As of October 7, there have been approximately six generations of cases of EVD since the outbreak began. The reported weekly case incidence peaked in the weeks of August 17 and 24 and has since fallen sharply. Genome sequencing revealed Ebola virus (EBOV, Zaire species) as the cause of this outbreak. A coding-complete genome sequence of EBOV that was isolated during this outbreak showed 99.2% identity with the most closely related variant from the 1995 outbreak in Kikwit in the DRC and 96.8% identity to EBOV variants that are currently circulating in West Africa.
Full Text of Results...

The current EVD outbreak in the DRC has clinical and epidemiologic characteristics that are similar to those of previous EVD outbreaks in equatorial Africa. The causal agent is a local EBOV variant, and this outbreak has a zoonotic origin different from that in the 2014 epidemic in West Africa. (Funded by the Centre International de Recherches Médicales de Franceville and others.)
Full Text of Discussion...
Read the Full Article...