In August 2013, our son Michael 'Mikey Danger' was diagnosed with HHE 'Hemi-convulsion Hemiplegia Epilepsy Syndrome'. This is a rare brain disorder. Despite being a prem baby along with his twin sister Jasmine, born at 31 weeks, Mikey was a very healthy little boy until he suffered a febrile illness at 10 months of age in August 2012.
Written by kellyw44, published 2 months ago. 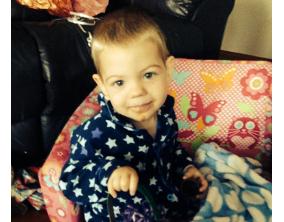 He was firstly misdiagnosed as having a stroke, as he presented with paralysis on the right side of his body. He regained some of his strength and movement in his leg within a few days of being in hospital but his arm/hand remained very tight and unable to be used, his speech was lost and he had a significant droop on the right side of his face. He suffered many seizures over the time he was in hospital, after which 2 MRI's showed significant atrophy of his left hemisphere (hemi-convulsion), and as a result, now also lives with Cerebral Palsy (hemi-plegia).
Michael remained in hospital for 2 weeks, whereby his seizures were finally controlled by a combination of medications. This seizure-free period lasted for about 8 months, but then he started having drop seizures, the same time we found out his twin sister was needing to undergo open heart surgery! To say we were doubled over with disbelief, is an understatement. As Jasmine was recovering from her heart surgery, Mikey's seizures became worse, he suffered up to 10 to 20 drop seizures a day - resulting in black eyes and a bruised little body. He wore a helmet to protect him and going to the park for a play was a very risky activity. However, despite his multiple injuries, his medication was reviewed and his seizures slowed down and for the following 6 months, he had no drop seizures, only the occasional absence seizure. He now regularly sees a neurologist for EEGs to further determine what activity is occurring in his left hemisphere (currently, his right hemisphere remains untouched and not involved with any seizure activity). Michael has received great support from multiple therapists to help him develop physically, emotionally and intellectually, with what he 'lost' at 10 months of age. He learnt to crawl again by 'bottom-shuffling' and he learnt to pull himself up using only his left arm/hand. He has re-learnt to say mumma and dadda - however, he continues to struggle with adding any more words to his vocab. Mikey receives regular OT, Speech and Physio therapy and we have seen a remarkable improvement with his physical abilities, and he's even started to high five with his fist of his affected side! It has taken nearly 2 years for this achievement.
Mikey is about to turn 3 years of age, and we have seen such a determined, cheeky little boy come through the last 2 years with a great deal of strength, that we, as his parents, draw on. We are almost at the 2 year anniversary of him dealing with HHE. Not much is known about this rare syndrome, and the outcome of having this disease, is a wait and see process, like so many others who are faced with uncertainty with their rare diagnosis. As a family, we have struggled to find anyone in Australia who also has this rare syndrome. It's a constant maze of enquiries and research our family is undertaking along with a great team of neurologists and allied health professionals, who support and assist Mikey to help him reach his full potential. Organisations like Rare Voices give children like Mikey the 'voice' that we need to advocate for improvements in his long term health, as well as the support in the day to day life of these unique syndromes.
Written by kellyw44, published 2 months ago.
Publicado por salud equitativa en 5:59