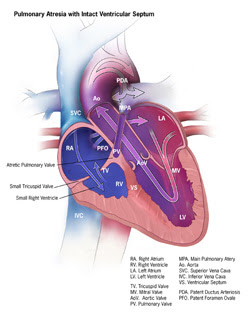 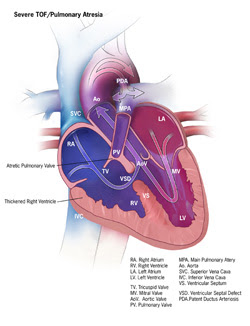 Pulmonary atresia is a birth defect of the heart where the valve that controls blood flow from the heart to the lungs doesn’t form at all. In babies with this defect, blood has trouble flowing to the lungs to pick up oxygen for the body.

What is Pulmonary Atresia?

There are typically two types of pulmonary atresia, according to whether or not a baby also has aventricular septal defect (a hole in the wall that separates the two lower chambers, or ventricles, of the heart):

Pulmonary atresia may be diagnosed during pregnancy or soon after a baby is born.

During pregnancy, there are screening tests (also called prenatal tests) to check for birth defects and other conditions. Pulmonary atresia might be seen during an ultrasound (which creates pictures of the body). Some findings from the ultrasound may make the healthcare provider suspect a baby may have pulmonary atresia. If so, the healthcare provider can request a fetal echocardiogram to confirm the diagnosis. A fetal echocardiogram is an ultrasound specifically of the baby’s heart and major blood vessels that is performed during the pregnancy. This test can show problems with the structure of the heart and how well the heart is working.

After the Baby is Born

During a physical examination, a doctor can see the symptoms, such as bluish skin or problems breathing. Using a stethoscope, a doctor will check for a heart murmur (an abnormal “whooshing” sound caused by blood not flowing properly). However, it is not uncommon for a heart murmur to be absent right at birth.
If a doctor suspects that there might be a problem, the doctor can request one or more tests to confirm the diagnosis of pulmonary atresia. The most common test is an echocardiogram. This test is an ultrasound of the baby’s heart that can show problems with the structure of the heart, like holes in the walls between the chambers, and any irregular blood flow. Cardiac catheterization (inserting a thin tube into a blood vessel and guiding it to the heart) also can confirm the diagnosis by looking at the inside of the heart and measuring the blood pressure and oxygen levels. An electrocardiogram (EKG), which measures the electrical activity of the heart, and other medical tests may also be used to make the diagnosis.
Pulmonary atresia is a critical CHD  that may be detected with newborn screening using pulse oximetry (also known as pulse ox). Pulse oximetry is a simple bedside test to estimate the amount of oxygen in a baby’s blood. Low levels of oxygen in the blood can be a sign of a critical CHD. Newborn screening using pulse oximetry can identify some infants with a critical CHD, like pulmonary atresia, before they show any symptoms.

Most babies with pulmonary atresia will need medication to keep the ductus arteriosus open after birth. Keeping this blood vessel open will help with blood flow to the lungs until the pulmonary valve can be repaired.
Treatment for pulmonary atresia depends on its severity. In some cases, blood flow can be improved by using cardiac catheterization (inserting a thin tube into a blood vessel and guiding it to the heart). During this procedure, doctors can expand the valve using a balloon or they may need to place a stent (a small tube) to keep the ductus arteriosus open. In most cases of pulmonary atresia, a baby may need surgery soon after birth. During surgery, doctors widen or replace the pulmonary valve and enlarge the passage to the pulmonary artery. If a baby has a ventricular septal defect, the doctor also will place a patch over the ventricular septal defect to close the hole between the two lower chambers of the heart. These actions will improve blood flow to the lungs and the rest of the body. If a baby with pulmonary atresia has an underdeveloped right ventricle, he or she might need staged surgical procedures, similar to surgical repairs for hypoplastic left heart syndrome.
Most babies with pulmonary atresia will need regular follow-up visits with a cardiologist (a heart doctor) to monitor their progress and check for other health conditions that might develop as they get older. As adults, they may need more surgery or medical care for other possible problems.

The causes of heart defects, such as pulmonary atresia, among most babies are unknown. Some babies have heart defects because of changes in theirgenes or chromosomes. Heart defects also are thought to be caused by a combination of genes and other factors, such as the things the mother comes in contact with in the environment, or what the mother eats or drinks, or certain medicines she uses.
Read more about CDC’s work on causes and risk factors »

In a 2012 study using data from birth defects tracking systems across the United States, researchers estimated that about 1 out of every 10,000 babies is born with pulmonary atresia1.