CDC - Blogs - Safe Healthcare – A Mother’s Account: “If We Had Known About Sepsis, We Would Have Looked for Sepsis”

CDC - Blogs - Safe Healthcare – A Mother’s Account: “If We Had Known About Sepsis, We Would Have Looked for Sepsis”

A Mother’s Account: “If We Had Known About Sepsis, We Would Have Looked for Sepsis”

Join the conversation at http://blogs.cdc.gov/safehealthcare 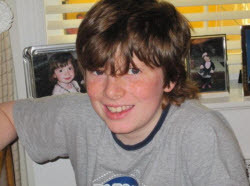 Today, on CDC’s Safe Healthcare Blog, Orlaith Staunton, mother of 12-year-old sepsis victim Rory Staunton, shares her family’s tragic story in hopes of preventing other families from suffering at the hands of sepsis.  In just a couple short days, Rory went from a healthy, active boy who scraped his arm playing basketball to developing severe sepsis.  Since Rory’s death, Orlaith and her family have become steadfast advocates of sepsis awareness, successfully working to develop and implement Rory’s Regulations, a set of protocols to identify or rule out sepsis early, especially in hospital emergency departments.  The family’s organization, The Rory Staunton Foundation, will host the First National Forum on Sepsis: Defeating the Killer, on September 17 in Washington, DC.

A Mother’s Account: “If We Had Known About Sepsis, We Would Have Looked for Sepsis”

Co-Founder of The Rory Staunton Foundation
Our son Rory Staunton, 12 years old, died on Sunday, April 01, 2012 from undiagnosed sepsis.
A few days earlier Rory fell playing basketball and scraped his arm. Rory began to feel ill just past midnight a day and a half after the fall. His dad and I brought him to our pediatrician. Rory was vomiting, feverish, with a pain in his leg, mottled skin, and low blood pressure. The pediatrician did not share his vital signs with us but assured us there was nothing to worry about – gave him a diagnosis of gastric flu and said he needed to be rehydrated. She sent him to a major New York hospital for rehydration. At the hospital, they concurred with the mistaken diagnosis. They gave him IV fluids, took blood tests, said to give him Tylenol and sent Rory home. Later black marks began appearing all over his body and we rushed our son back to the hospital where he died in ICU on Sunday evening. The cause of death was severe septic shock brought on by infection, hospital records say. The blood test taken at the ER remained unread; it showed massive numbers of immature white blood cells in his system-a known sepsis indicator.


What we now know is that Rory’s condition was very serious when we brought him to his pediatrician. Bacteria had entered into his blood and he was going in to septic shock. Rory showed the classic signs of sepsis. Sepsis kills 258,000 Americans a year (more than AIDS, lung cancer, stroke and breast cancer combined) yet over 60% of Americans do not know about sepsis. We believe if any of the medical professionals we entrusted with Rory’s care had thought sepsis and ruled out sepsis he would be alive today. Sepsis responds to antibiotics and IV fluids-they are crucial. It is also very important that they are given to the patient as soon as sepsis is suspected. Failure to provide antibiotics and IV fluids means that the patient loses 8% of their body function every hour. If Rory had received this care when we brought him to the hospital we believe he would be alive today.
In our son’s name we have worked with state, federal and local officials to ensure this does not happen to any other child or adult. We have succeeded in getting Rory’s Regulations passed New York State. These are a set of mandated protocols that ensure that hospitals rule out sepsis particularly in the emergency room where a sepsis patient is most likely to present. We have spoken before the United States Senate and our story has received coverage by major print and media outlets. We will host the First National forum On Sepsis: Defeating the Killer in Washington D.C. in September.
Our hope for the future is that no other family suffers the way we have suffered.

We know Rory would want us to help others just like he had done during his short life. We want people to think sepsis and we want professionals to rule out sepsis. We want more awareness of this deadly silent killer.
Publicado por salud equitativa en 7:44