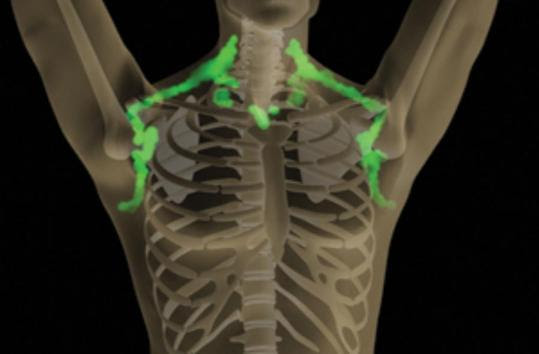 Caption: Brown fat—actually marked in green on this image—is wrapped around the neck and shoulders. This “shawl” of brown fat warms blood before it travels to the brain.
Illustration: John MacNeill, based on patient imaging software designed by Ilan Tal. Copyright 2011 Joslin Diabetes Center
If you want to lose weight, then you actually want more fat, not less. But you need the right kind: brown fat. This special type of fatty tissue burns calories, puts out heat like a furnace, and helps to keep you trim. White fat, on the other hand, stores extra calories and makes you, well, fat. Wouldn’t it be nice if we could instruct our bodies to make more brown fat, and less white fat? Well, NIH-funded researchers have just taken another step in that direction [1].
A while ago, I told you about proteins that influence the development of brown fat cells, but the unraveling of this biological mystery continues. Today, I’m sharing the work of researchers at the University of California, San Francisco, who have discovered a key gene driving the engine of brown fat production. Even more exciting, they have linked mutations in this gene to obesity in humans.
A few years ago, members of this team discovered two master regulators of brown fat development [2]. When they inserted both of these genes into ordinary skin cells, they could reprogram the cells and transform them into brown fat. A major achievement, but neither of the genes seemed to be a good target for drug therapy. So, they began to study one of the proteins, called PRDM16, in detail to figure out exactly how it coaxed precursor cells to become brown fat. In the newly published work, they found that PRDM16 needs to interact with an enzyme called EHMT1 to produce brown fat.
Searching a database of human genetic mutations, the researchers discovered that people with rare mutations in the EHMT1 gene are obese. That finding is important because it’s the first evidence in humans suggesting that deleterious mutations in genes controlling brown fat production can cause obesity.
To probe EHMT1’s activity, the UCSF team created a strain of mice in which the gene that codes for this enzyme was deleted, not from the whole animal, but just in the precursor cells destined to develop into brown fat. Without EHMT1, these precursor cells failed to develop into brown fat. The mice lacking EHMT1 were heavier than normal mice, even though they ate identical diets. They also had higher glucose levels, greater insulin resistance, and more fat in their livers—traits characteristic of diabetes and other metabolic diseases.
These findings suggest a new approach to treating obesity, which is urgently needed because more than one in three U.S. adults is obese, and current treatments are far from ideal. Some anti-obesity medications suppress appetite, while others block fat absorption. But both types can cause undesirable side effects.
Moving forward, the UCSF group hopes to team up with collaborators to find chemical compounds that will activate the EHMT1 enzyme. If they succeed, perhaps we will someday be able to use medication to increase production of brown fat—and, in turn, burn up extra calories and white fat.
References:
[1] EHMT1 controls brown adipose cell fate and thermogenesis through the PRDM16 complex. Ohno H, Shinoda K, Ohyama K, Sharp LZ, Kajimura S. Nature. 2013 Nov 6.
[2] Initiation of myoblast to brown fat switch by a PRDM16-C/EBP-beta transcriptional complex. Kajimura S, Seale P, Kubota K, Lunsford E, Frangioni JV, Gygi SP, Spiegelman BM. Nature. 2009 Aug 27;460(7259):1154-8.
NIH support: National Institute of Diabetes and Digestive and Kidney Diseases
Publicado por salud equitativa en 12:40